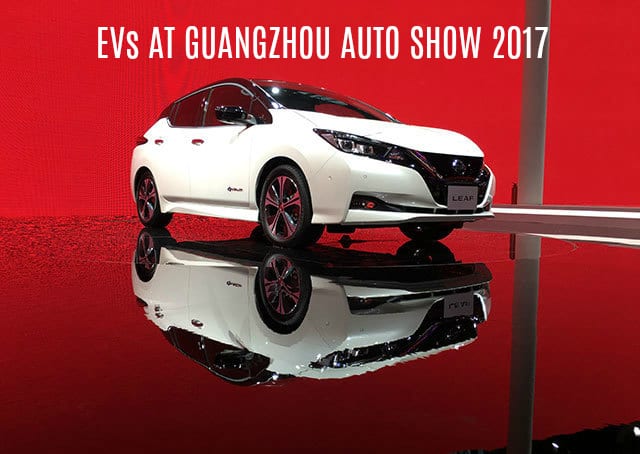 The 15th Guangzhou Auto Show ran from the 17th of November to the 26th of November 2017 and provided an exciting glimpse what new and updated EV models the Chinese EV market can expect in 2018. Chinese auto manufacturers released around ten New Energy Vehicles into the Chinese market at the show including the long-awaited BAIC Arcfox Lite, previously known as the Arcfox 1. Imported brands were well represented with Tesla showcasing the Model’s X and S, BMW the i3, Daimler the Smart and EQ Concept, the Volvo XC60, Range Rover P400e, and Nissan the 2018 Leaf. Ford showcased the Changan Ford Mondeo Energi, based on the Ford Fusion Energi. Unfortunately, the Mondeo Energi does not qualify for the EV subsidy since its range is below the 50km threshold for plug-in vehicles.

The Inner Mongolian automaker, Hawtai, brought four new EVs to the show representing one of the most aggressive electric vehicle strategies at the event. SAIC introduced various new energy vehicles under its sub-brands including the listing of a hydrogen fuel cell version of the Maxus 80 LDV. The most exciting presentation from SAIC‘s stable was the eMG6 PHEV which is the first EV for the iconic MG brand. SAIC also brought its first electric wagon, the Roewe ei5 with a pure electric drivetrain to the show which will be released early in 2018. Great Wall‘s new brand WEY introduced the striking WEY P9 PHEV SUV with its Bentley like front grill. Appart from the Arcfox Lite BAIC also revealed its production-ready SUV, the ET400 which will be released shortly. Chery showcased the Tiggo 3xe compact SUV and the Exceed TX both which will be available to the market in 2018.

Some multi-purpose vehicles with electric drivetrains were introduced including the listing of the Foton Toano and the Dongfeng Lingzhi M5. Lessor known brand Kawei listed its pick-up truck the Kawei EV7 with a range of 350km (219 miles).

Some of the concept vehicles that caused a stir included WEY‘s XEV with a range of 530km and the iSPACE which is a collaboration between GAC and Tencent.

The list below provides a visual summary of some of the new energy vehicles at the 2017 Guangzhou Auto Show. We provide more detailed specifications of all the vehicles on the list on the wattEV2buy website.