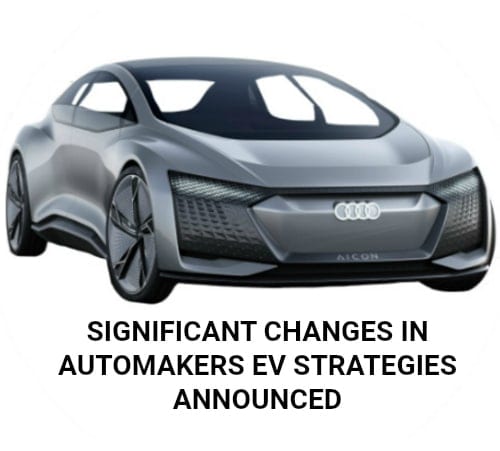 The past week saw a number of the top automakers making announcements on their EV strategies, all of which indicating a ramp-up in EV production up to 2025.

BMW announced that it will produce 25 electric vehicles by 2025 of which 12 will be fully electric.

Mazda announced its technology development strategy, ‘Sustainability Zoom Zoom 2030’, which targets a 50% emission reduction by 2030. The strategy also targets safety improvements, which speaks to some level of autonomy.

Ford announced that it will electrify all its Lincoln models by 2022 and also develop new all-electric models for its US marque brand.

Volkswagen unveiled its electrification roadmap, ‘Roadmap E’ on the 11th of September. The comprehensive plan aims to have 80 electric vehicles by 2025, of which 50 would be all-electric models and the balance PHEVs.

Mercedes Benz CEO, Dieter Zetsche, was cited by Autoblog as indicating that the German automaker would produce 50 electrified versions of its models by 2022.

The following production EVs were announced or entered the market during the past week. Mercedes Benz unveiled the third generation hybrid transmission Mercedes-Benz S 560 e PHEV. The S series Mercedes Benz has a range of 50km / 31miles, a combined fuel consumption of 2.1 l/100 km, combined CO2 emissions of49 g/km and weighted power consumption of 15.5 kWh/100 km. Daimler also delivered the first Fuso eCanter in the USA to UPS.

Some of the concept EVs unveiled during the past week at the Frankfurt Auto Show.

Thunder Power unveiled the Thunder Power SUV at the Frankfort Auto Show and announced the limited launch of its Launch Edition Coupe of which only 488 will be produced by Q2 2019. The vehicles will be built on the companies new platform featuring a 125kWh battery providing a NEDC range of up to 650km and a motor producing 430kW and reaching a top speed of 250kmh. Production of Launch Edition Coupe will be followed by the Sedan in 2019 and the SUV from 2020.

Honda unveiled its Urban EV concept with the intent to launch it in Europe and possibly other markets in 2019. Volkswagen introduced a second iteration of the VW ID Crozz, and BMW unveiled its vision for electric vehicles aimed at competing with Tesla. The BMW i Vision Dynamics has a possible range of 600 km (373 miles), over 200 km/h (120 mph) top speed, and an acceleration of 0-100 km/h (62 mph) in 4.0 seconds.

The Chinese Ministry of Industry has started planning a timetable for the banning of fossil fuel vehicles. Though no timetable was provided, Deputy Minister, Xin Guobin was quoted as saying – “Some countries have developed a timetable for the cessation of production and sales of traditional energy vehicles, the Ministry of Industry has also started the relevant research, will also be with the relevant departments to develop our timetable, these initiatives will promote the development of China’s auto industry…” At the end of 2016, China had over 200 million combustion vehicles on its roads, creating an environmental challenge due to pollution caused by vehicles in cities.

In related news, China connected a network of 167,000 EV charging stations via the telematics platform of the State Grid Corporation, making it one the largest charging networks globally.

TOP EV NEWS #4 – CORPORATE NEWS OF THE PAST WEEK

Alphabet is considering an investment of $1 billion in Lyft according to Bloomberg. The move would build on the co-operation the two companies already have in developing autonomous technology. Alphabet is already invested in Lyft’s competitor, Uber, but Waymo, Alphabet’s self-driving point company, is suing Uber for stealing some of its self-driving tech.

Daimler made another investment in charging technology, this time investing in Israeli based StoreDot, a start-up specializing in super fast EV charging solutions.

TOP EV NEWS #5 – AUTONOMOUS NEWS OF THE PAST WEEK

General Motors and its subsidiary, Cruise Automation, unveiled a production-ready self-driving car based on the Chevrolet Bolt electric vehicle. Up to now, autonomous cars are all hand build, a process that can only produce a couple of hundred cars a year, but presenting a self-driving car that is based on a mass-market platform is a game changer for GM.

Audi showcased the progress it made thus far on autonomous technology from SAE Levels 3 to 5 at the Frankfurt Auto Show this week, through three vehicles with autonomous capability. The Audi A8 with Traffic Jam Pilot, allowing full autonomy on highways up to speeds of 60kmh (37.3mph). The Audi Aicon, the German automaker’s Vision vehicle for self-driving. The Aicon, pictured below, has no pedals or steering wheel and is designed for purely electric operation and should be able to cover distances between 700 and 800 kilometers (435.0 – 497.1 mi) on a single charge. The company also introduced the Audi Elaine, an electric-powered SUV coupe that in a few short years will make highly automated driving possible – at times even without a driver on board.