Germany has joined the subsidy game later than other countries on this list, but their ambitious goals have cemented them into the third spot. At the beginning of 2016, Chancellor Merkel introduced a green car subsidy up to €5000 to boost BEV and plug-in hybrid sales.

This plan was implemented as of February 2016 and includes a 40% purchase subsidy paid by the German government which means private buyers would receive the full €5000 while corporate buyers would receive up to €3000. Incentives will decrease by €500 a year till the scheme has run its course. This scheme is planned to run until 2020, and the German government hopes to have 1 million electric vehicles on their roads by that time.

Click through to our detailed breakdown of EV sales in Germany filled with charts, tables, and insights. We look at the Top EV brands in Germany, the gainers, the worst performing German EVs and the battle between BEV and PHEV models. 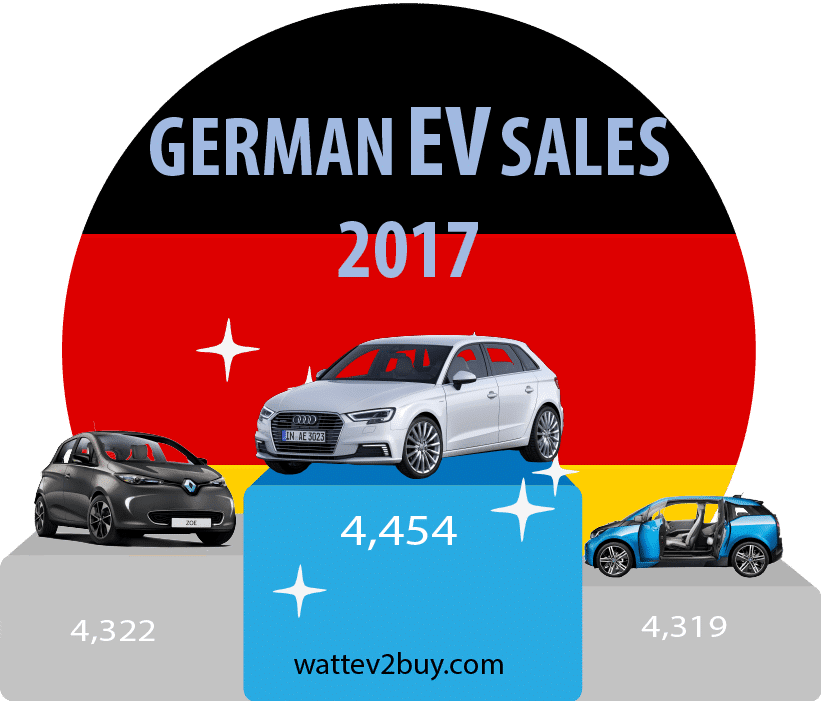 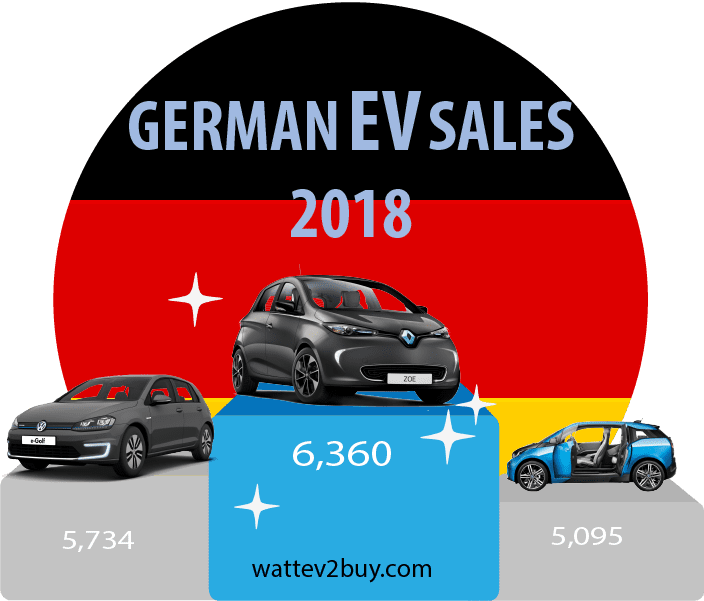 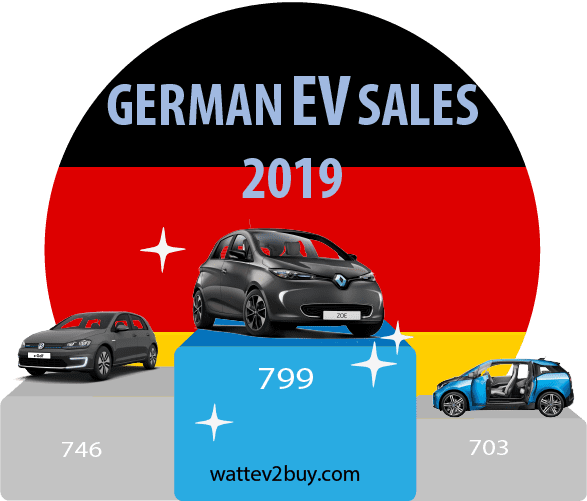 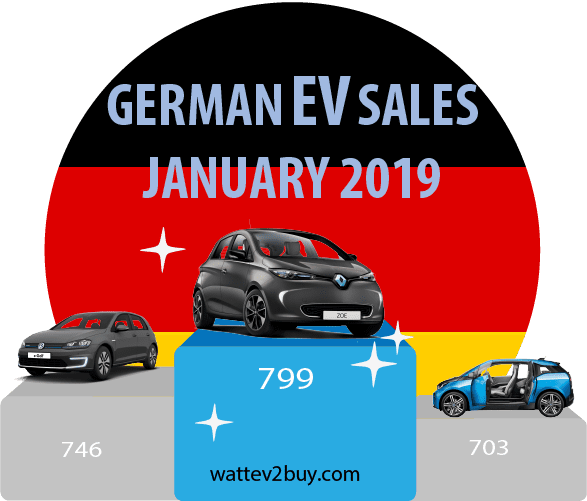 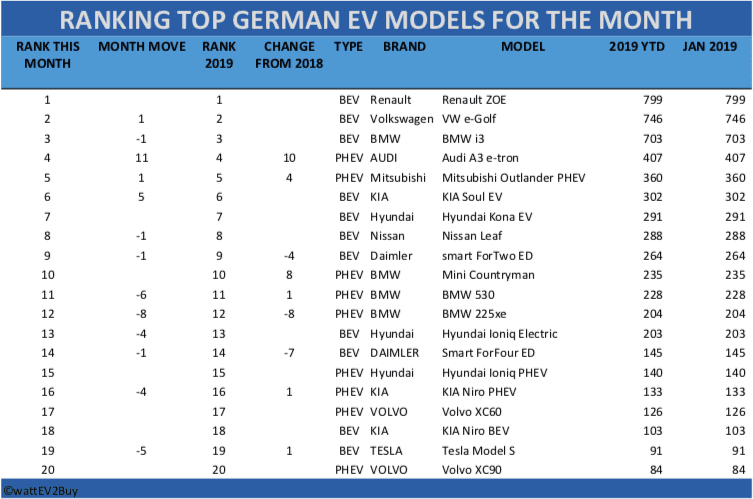 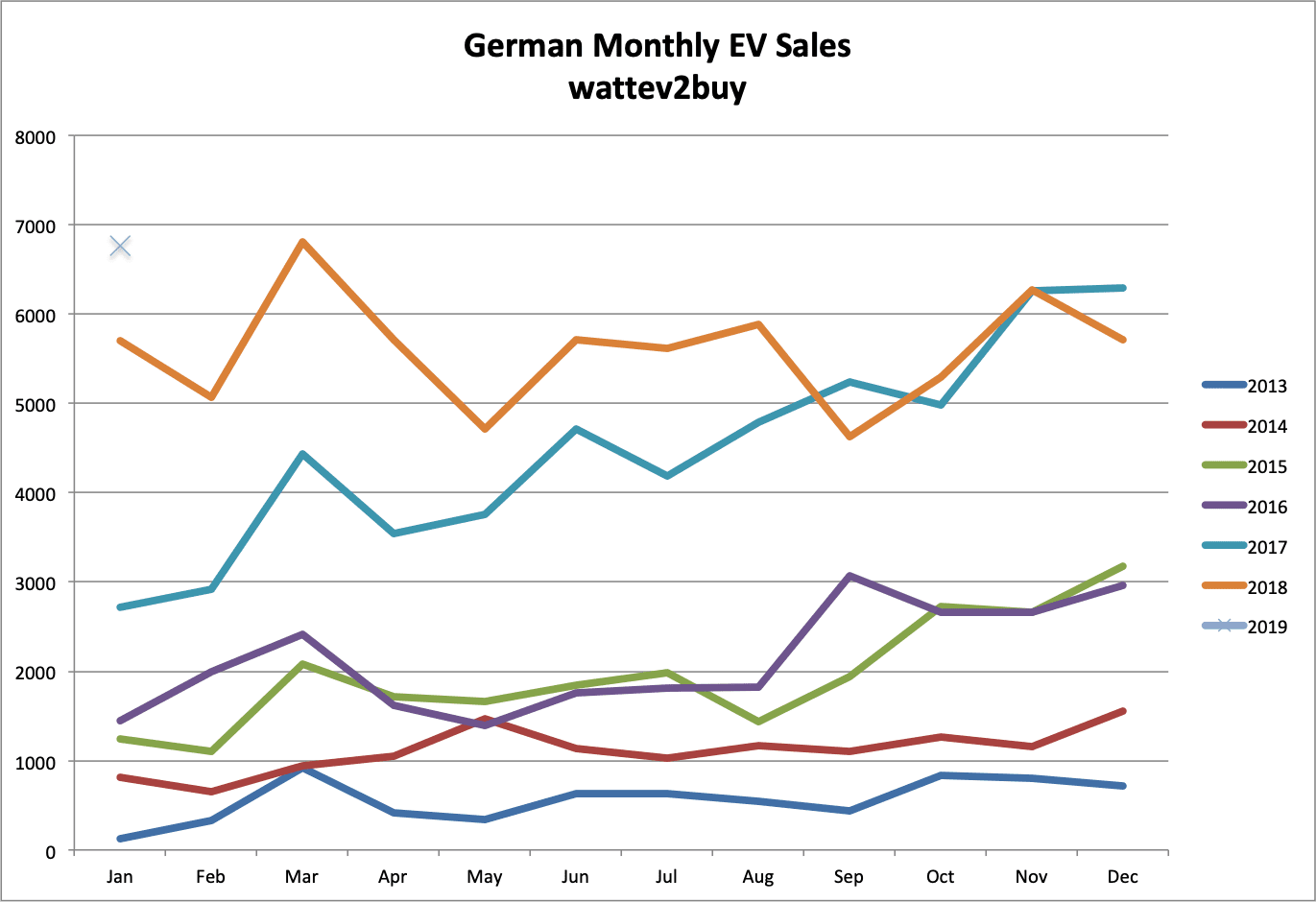 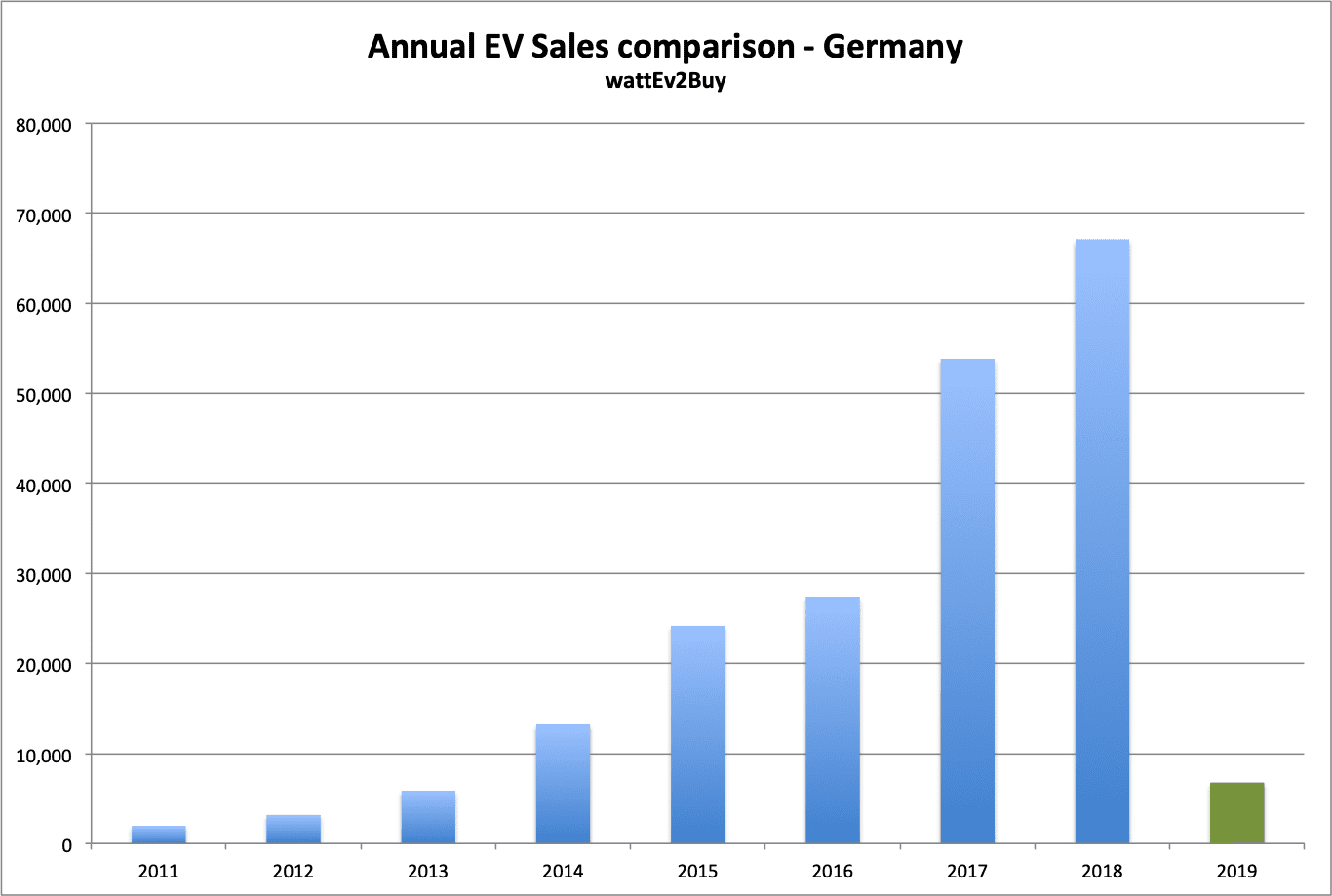 GERMAN EV SALES IN THE NEWS

According to a survey by the German publication “Automobilwoche” the success of electric cars in Germany seems to be the technologies biggest risk as prospective buyers now face delivery times that can have them waiting as long as a year for their new EV. The problem is not isolated to buyers of imported vehicles only but also local brands such as Volkswagen where buyers have to wait until October 2018 for delivery of e new e-Golf purchased today. Smart CEO Annette Winkler said that the increase in demand is much stronger and faster than could have expected and planned for with the companies suppliers, resulting in buyers only receiving their new Smart by the end of 2018 or early 2019.

To compensate for the increased demand Volkswagen has introduced a second shift at its Dresden plant as e-up! buyers wait for five to six months. According to the survey, the waiting period for a Hyundai Ioniq EV is up to 12 months, the 2018 Nissan Leaf is around ten months, and six to seven months for the Peugeot ION and Kia Soul EV. Renault Zoe buyers only have to wait four months while the waiting list for a BMW i3 is the shortest at two to three months. The problem is not isolated to private buyers but fleet buyers are also affected. The software giant SAP wants to be carbon neutral in 2025 and is currently expanding its e-fleet. SAP manager Marcus Wagner told “Automobilwoche”: “If you want to buy a full electric in February 2018, you will get almost none.” It seems to me the problem is not isolated to buyers which place pre-orders for new EVs like the Tesla Model 3.

I hosted the friendly team of EV-Volumes last week in Cape Town and from the comments over a glass of beautiful Cape wine we concluded that the EV market has reached its tipping point.

Electric vehicles have developed tremendously in recent times, battery capacity and range have increased exponentially, and new investors are flooding into the market to get their share of the pie. The logical question is, where to next with this amazing technology?

Siemens and Germany have announced their collaboration the eHighway which is being constructed on a 10 km strip of the Autobahn close to the Frankfurt Airport in Germany. Though 10km (6miles) doesn’t seem like much, this could be a groundbreaking step for electric trucks in the future. eHighways could cut input costs for companies dramatically and could make the price of goods independent from oil prices.

To learn more about eHighways check out this video.

As the June EV sales data are being released, we have been able to create half-year reports for the key markets. Most of the of the key markets are showing exceptional growth in the first half of 2017. The increased sales are helped with the release of a slew of new models. As many as 20 new models have entered the Chinese EV market since June 2016 while most European markets saw ten or more new models. Some of the highlights are:

China: Chinese EV sales are recovering at a decent pace. EV sales in May showed a continuation of the trend started in March 2017. Chinese EV sales are now more than 50% higher than the same period a year ago. May EV sales of over 40,000 units bring the year-to-date sales to 134,000 units. Smaller cars like the Zhidou D2 and BAIC E180 still rule the roost. The new Chery eQ1 has also made the Top 20 list for the month.

BMW unveiled its new BMW Digital Charging Service (DCS) optimizes charging technology for the BMW i and BMW iPerformance vehicles through the BMW i Wallbox. The DCS platform provides autonomous and intelligent charging optimization through tariff and solar vehicle charging. The DCS service will initially be available for the German and Dutch markets from early 2017.

Reuters reported that the Germany utility RWE this week spun out its renewable energy business into a separate vehicle, Innogy via a listing on the Deutsche Bourse. The new company aims to focus on the US charging station network. The CEO announced that the agreement was reached with the Californian regulators to accept German car charging standards.