Top 4 countries who pay its citizens to go electric 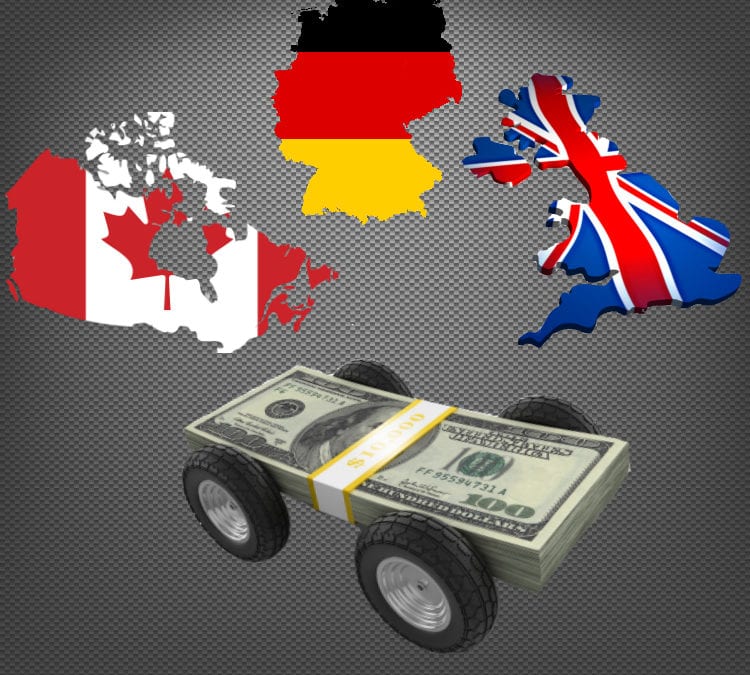 When compiling these rankings, we looked at specific criteria such as the how well the subsidiary plan is implemented, how well the plan promotes EV sales as well as the longevity of the plan. An honorable mention to America who did not make it onto our list because of recent political question marks surrounding their commitment to sustainable energy.

The UK is not particularly known as the “greenest” country in the world, but this does not imply their unwillingness to move to a greener future. In the UK a person can get a grant towards the cost of a new electric car, van or motorcycle as long as it meets certain criteria.

Firstly the cost that is covered by the government includes the basic price of the vehicle, number plates, and vehicle excise duty but does not include delivery charges, first registration fee or any optional extras. According to the UK’s official website Gov.UK, citizens who buy an electric vehicle in 2017 could receive 35% of the cost of the car (up to a £4,500) depending on the model.

These vehicles are divided into categories:

In the short period, these initiatives have been implemented there has been a tremendous increase in the registration of electric vehicles in the UK.

Electric vehicle owners are also exempt from paying the London congestion charge as of July 2013 which means EV owners in the UK are major winners compared to ICE (internal combustion engine) owners.

Germany has joined the subsidy game later than other countries on this list, but their ambitious goals have cemented them into the third spot. At the beginning of 2016, Chancellor Merkel introduced a green car subsidy up to €5000 to boost BEV and plug-in hybrid sales.

This plan was implemented as of February 2016 and includes a 40% purchase subsidy paid by the German government which means private buyers would receive the full €5000 while corporate buyers would receive up to €3000. Incentives will decrease by €500 a year till the scheme has run its course. This scheme is planned to run until 2020, and the German government hopes to have 1 million electric vehicles on their roads by that time.

According to Nissan if from now on electric car sales double every year until 2020, it is possible to achieve the goals set out by the government.

The government has set aside 1 Billion euros to implement this scheme which shows their intent to make German roads green as quickly as possible. A total of €600 million (US$678 million) is reserved for the purchase subsidies, which are expected to run until all the money is disbursed, estimated until 2019 at the latest. Another €300 million (US$339 million) are budgeted to finance the deployment of charging stations in cities and on autobahn highway stops. And another €100 million (US$113 million) would go toward purchasing electric cars for federal government fleets. The program is aimed to promote the sale of 400,000 electric vehicles. The cost of the purchase incentive is shared equally between the government and automakers.

As of September 2016, BMW, Citroën, Daimler, Ford, Hyundai, Kia, Mitsubishi, Nissan, Peugeot, Renault, Toyota, Volkswagen, and Volvo had signed up to participate in the scheme.

Canada has booked their place in the second spot on our list with their unique approach to subsidizing electric vehicles. Canada does not have a “one size fits all” scheme like Germany that is applied to the whole of the country. Instead, they leave it up to each province to set their regulations regarding subsidizing EVs, creating a competitive environment between provinces to reduce fuel emissions. So what does this mean for an average Canadian? If you buy an EV in Ontario, you will receive a $14000 rebate, but if you walk across the provincial border to Quebec, you will only get a $3000 rebate.

The government of Ontario has by far the best subsidiaries when it comes to EV’s up to $14,000 off the purchase of an electric car( You also get up to $1,000 off the purchase and installation of a home charging station). EV owners receive a green license plate that allows them to use high-occupancy vehicle/toll (HOV/HOT) lanes when driving alone. The amount each car receives is based on four factors: 1. battery size, 2. number of passengers, 3. vehicle price (including trim) and 4. terms of the lease.

The government of Québec offers a rebate of up to $8,000 off the purchase of an electric car and 50% of the cost of buying and installing a charging station up to a maximum of $600. For more information, visit Government of Québec.

Where can one start with this EV mecca, not only does Norway surpass each of the countries in EV’s per capita, they are actually in a class of their own. Just to put this into perspective, here is a chart depicting Norway’s concentration of plug-in electric cars per 1000 people:

Norway also holds the record for the highest-ever monthly market share for the plug-in electric passenger segment (achieved in January 2017) with 37.5% of new car sales. EV sales in the country have kept its momentum and powered ahead with Q1 2017 year-to-date increase of 20.03%.

How do they achieve these incredible records you ask? They aren’t even an EV-producing country. The answer is simple; the Norwegian government offers so many benefits to EV drivers that citizens would be foolish not to participate in this EV frenzy.

In Norway, all electric cars and vans are exempt from non-recurring vehicle fees, including purchase taxes, and 25% VAT on the purchase, making the purchase price of EV’s competitive with conventional cars. Also, the government approved a tax reduction for plug-in hybrids starting in July 2013. The government’s initial goal of 50,000 pure electric vehicles on Norwegian roads was reached by late April 2015. The subsidiaries were so successful they decided to extend their program till 2017, local authorities also granted EV’s the right to park free of charge and use public transport lanes. They are also planning a National Transport Plan (NTP) which lays the foundation for all new cars, buses and light commercial vehicles to have zero emissions by 2025 (this includes all-electric and hydrogen vehicles).