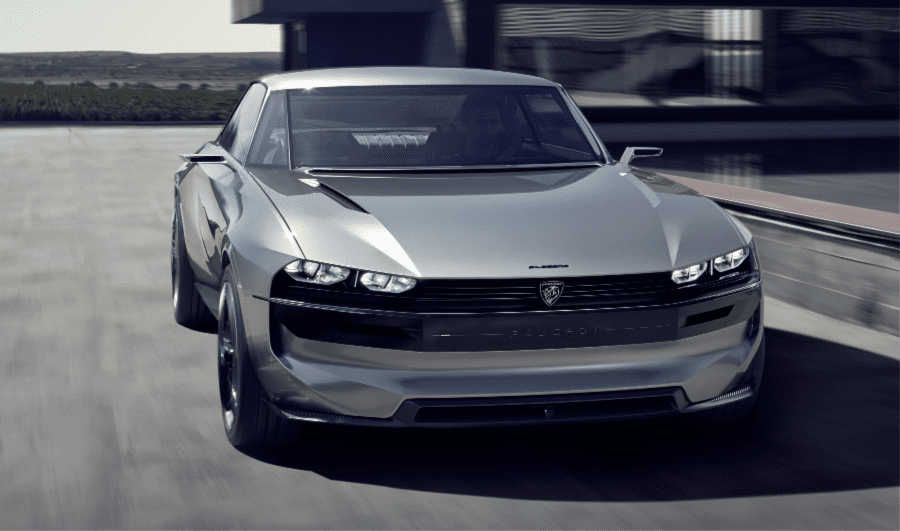 Peugeot revealed its e-LEGEND Concept EV showcasing its vision of the future electrification strategy. The e-LEGEND which is based on a retro Peugeot 504 Coupe will be presented at the Paris Auto Show early October 2018.

Head of Peugeot Strategy, Aude BRILLE was quoted saying ” With PEUGEOT e-LEGEND CONCEPT, for us it’s about intensifying and refining the experience of 100% autonomous, electric and connected. The Responsive i-Cockpit is enhanced to offer its guests immersive driving specifically customized for each of the four driving modes available.”

The e-LEGEND is equipped with two autonomous modes, SOFT and SHARP. In the SOFT mode, the technology is reduced to a minimum while in the SHARP mode maximum connection and digital activities are shown to entertain the occupants while the self-drive system steers the vehicle. In autonomous mode, the steering wheel retracts behind the 49inch screen and the front seats can recline and side armrests deploy automatically. The e-LEGEND also has two manual modes, LEGEND and BOOST for cruising and dynamic drive options.

The Peugeot 504 Coupe’s four-wheel drive drivetrain is developed around a 100 kWh battery pack and electric motors which reaches 800 Nm torque and 340 kW reaching a top speed of 220km/h (138mph) and accelerate to 62km in less than 4 seconds. The e-LEGEND has a WLTP range of 600km (375 miles) and the battery pack can be replenished to 80% within 25 minutes through the inductive charging system.

In 2016 Great Wall Motors acquired a stake in neighborhood electric vehicle producer YGM. The company which changed its name to Link Tour in July was officially launched this week. Link Tour which specializes in compact electric cars will produce five EVs by the end of 2019. The Link Tour K-One compact SUV is the first vehicle that will roll off the production line before the end of 2018. The four other models that will enter the Chinese market by the end of 2019 is the BX100, C5, C3 and S5. The BX100 is a microcar resembling an older generation smart model and released in May 2019. The C5 and C3 are also A00 class vehicles and will enter the market in September and November 2019. The S5 is developed on the K-One platform. The Link Tour EVs will have a range of between 150km and 405km and four of the five models will be equipped with battery swapping technology while one of A0 class EVs will have three portable battery packs.

The K-One is available from November 2018 in a 45kW / 40kWh battery and 96kW / 46kWh version providing a range of 310km and 405km. The Link Tour K-One is further equipped with ABS and ABRS and luxuries such as parking sensors, reversing camera and tire pressure monitor system. Drivers operate a navigation system, cell-phones, and infotainment system form a 10.3inch LCD screen.

Volkswagen Group has been quite busy the past weeks in executing its electrification strategy. VW is reading its plant in Zwickau to produce 100,000 I.D. vehicles, VW’s EV brand by 2020. Zickau will be VW’s first EV plant and followed by 15 others across the globe within 3 years. In China, Volkswagen opened a 300,000 unit SUV plant in Foshan which will play a pioneering role in the Volkswagen Group’s electrification strategy (“Roadmap E”). The FAW-VW plant in Qingdao which opened in May 2018 will also produce MQB platform electrified vehicles alongside cars with combustion engines.

Volkswagen Group announced the completion of an equity stake to the value of $100 million in California based QuantumScape solid-state battery producer. The new joint venture aims to enable an industrial level of production of solid-state batteries.

Volkswagen presented a cargo van version of the ID Buzz at the IAA Commercial Vehicles in Hannover. The ID Buzz Cargo electric van will be introduced in 2021 and have a range of up to 340 miles o the WLTP cycle. The concept van presented in Hanover is a fully autonomous vehicle equipped with VW autonomous system the ID Pilot, providing Level 4 self-driving capabilities. A solar system on the roof allows for an extra 9.3 miles a day at peak. Vehicle and road information is projected onto the road in 3D via the ID Buzz’s Augmented Reality (AR) head-up display. For detailed specs click here.

Ford revealed the production model of its Transit Custom plug-in hybrid electric van at the IAA Commercial Vehicle show in Hannover, Germany which will enter the market in H2 2019. The Transit Custom PHEV with its 1,000kg load capacity has a battery electric range of 50km from a 14kWh battery pack and an extended range of 500km using its 1.0 liter EcoBoost engine. The charge port located on the left side of the front bumper allows for charging in between five and three hours.

The president of GM’s Cadillac unit told Automotive News that the company decided on electrification as it re-evaluates its diesel program. To date, Cadillac has only produced the discontinued ELR plug-in hybrid vehicle and the CT6 PHEV currently in circulation. The decision by Cadillac will snowball the demise of the diesel engine as it joins other automakers such as Volvo, BMW, VW and Mercedes who all announced the end of their diesel programs. Porsche also announced this week that it will drop diesel propelled vehicles

Dutch charging company EVBox committed to installing 1 million EV charging points by 2025 globally at the Global Climate Action Summit in San Francisco. The company made the commitment as a surge in electric vehicle sales will require California only requiring 279,000 chargers by 2025.

The British EV Network’s (EVN) selected Swiss battery manufacturer Leclanché SA to partner with in to develop ultra-fast charging stations for electric cars across the UK follow the existing “petrol station format”. EVN has been securing prime locations across the UK and signing strategic partnerships with leading companies including leading EV charging station operators like ESB and Leclanché to this end. EVN is also planning to replicate its model in other countries from 2019.

The Beijing local government authority released 11 more public roads in the Fangshan District for autonomous vehicle testing bringing the total to 33 since the start of the program earlier the year. Approved self-driving cars get a temporary number plate to drive on public roads after successfully complete 5,000km (3125 miles) on “closed” test fields. Only drivers with 50-hours of training are allowed to operate self-driving test vehicles.

NVIDIA unveiled its DRIVE AGX XAVIER opensource devkit for autonomu\ous vehicles consisting of A Xavier car computer, a vehicle harness to connect the platform to the car, international power supply, camera sensor and other accessories. The XAVIER devkit is a scalable software and hardware solution enabling companies to seamlessly develop and test customized autonomous driving technology and streamlining production.