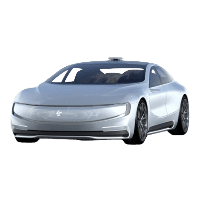 One can’t be blamed for being confused when reading press announcements by Faraday Future and its shareholders the past week. A press release on the Faraday Future (FF) website dated August 16 states that the company does not have any plans to move its global headquarters to anywhere outside of California and goes further providing reasoning why it will not change. FF spawned from the Chinese online video service provider LeTV and its controversial founder Jia Yueting ran into financial trouble. The company was bailed out in June by Chinese property giant Evergrande Health Industry Group which acquired 45% in the company.

The white night shareholder Evergrande announced this week that Evergrande Faraday Future Intelligent Vehicle (Guangdong) Co., Ltd which acquired a 401,000 square meter piece of land in Nansha District, Guangzhou will establish FFs operating HQ in China. The company aims to produce 5 million vehicles over the next ten years such as the FF91 and FF81 electric vehicles based around a connected intelligent mobility ecosystem. Evergrande Faraday Future stated that it would achieve its goal through the development of five R&D and production bases throughout China. Although the Chinese base is labeled as “Operational” HQ in the country a poisoned pill in the funding arrangement by Evergrande Health could see the global HQ shift to China.

LeEco, the Chinese IT giant this week announced that it raised over $1bln mostly from local investors, up from the initial $500M for its all-electric supercar, the LeSEE. The Chinese investment community is very bullish on the technology in the country with the Government promoting the industry to allow for the sales of up to 5million EV’s per year by 2020.

LeEco, the Chinese automaker and financial backer of Los Angeles-based Faraday Future announced its plans to build a $1.8 Bln vehicle assembly plant in China, which will enable the company to produce around 4000,000 vehicles per year.

The controversial LeEco announced the groundbreaking of its plant in the city of Hangzhou, Zhejiang Province China. LeEco is entwined between Faraday Future and the LeSee electric vehicle manufactured by LeEco. Both companies were founded by Chinese businessman Jia Yueting. Both businesses are known for making bold statements and big ticket announcements just to be followed by press reports of cash flow and funding problems.

The announcement comes at a time when Faraday Future is battling to break ground on its plant in Northern Los Angeles. The company could not even pay the $21 million deposit to Aecon despite being offered $300 million by the local authorities for building the assembly plant there. LeEco has also partnered with Aston Martin on the RapidE, where it will help with the development of the zero emission technology. Faraday Future is said to hold the patents to the technology, but recent reports state that the technology is in fact held by a separate company in the Cayman Islands, creating insecurity for investors and borrowers.

We have followed the Chinese “Netflix,” LeTVs, misadventures in the electric vehicle sector for the past year. LeTVs auto companies, Faraday Future in the USA and the LeEco in China, is well known for overpromising and underdelivering on its goals. The reason for the failure of the enterprises to make good on the hype created around it stems mostly from a cash crunch at the parent company, LeTV, due to it overextending itself in a wide range of projects. The founder of LeTV, Jia Yueting, had to personally jump in and save the two electric vehicles from faltering as groundbreaking of the Faraday Future ground to a halt while the launch of the FF91 at the CES 2017 flopped and the JV with Aston Martin was suspended. At the start of June, the Shenzhen Stock Exchange suspended the launch of the company’s RMB 2 billion bond which was supposed to provide cash flow to LeTV and its subsidiaries.

This week Jia Yueting announced that LeTV would complete A-round financing by the end of the year to fund its vehicle projects housed under LeAuto. The funding will be used for mass production of electric vehicles. Jia Yeating stepped down recently as General Manager at LeTV and took a board position at LeAuto and FF Global. Faraday Future also clawed back some reputation this week as the FF91 prototype set a new production vehicle record at Pikes Peak.The FF91s time of 11 minutes 25.083 seconds record was 20 seconds faster than the previous record set by a modified Tesla Model S. Should the funding fails it will most probably be the end of the projects as LeTV has racked up large debts already resulting in large-scale layoffs and halting of projects.