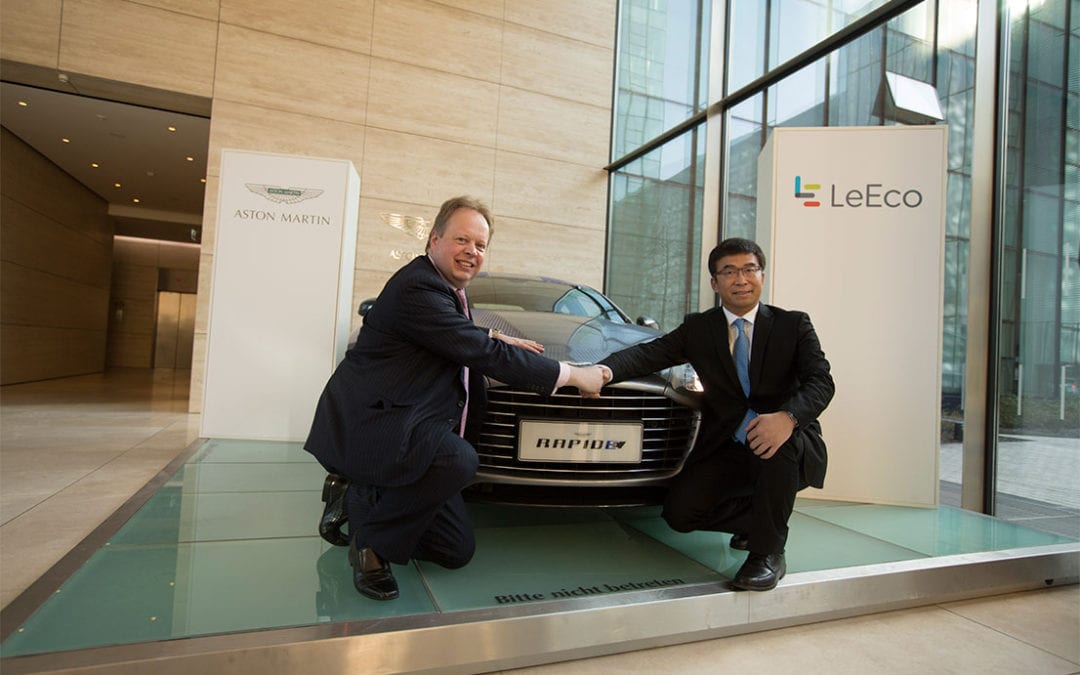 It was just a matter of time for the newly formed partnership, barely five months old, between LeEco and Aston Martin hit the rocks, creating a roadblock for the Aston Martin EV strategy. Although none of the two companies officially announced the breakup of the Joint Venture to develop electric vehicle technology, China Money Network recently reported the suspension of the partnership by the British luxury carmaker. 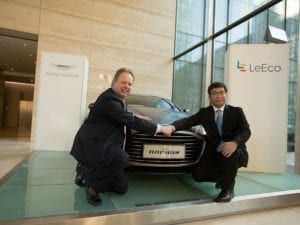 The terms of the JV was for LeEco to help with the development of low emission vehicle technologies and deliver a concept car within two years. The partnership was funded by China Equity and the Chinese President oversaw the signing of the agreement. It was expected that the concept car will produce more than 1,000hp. The partnership also extended to the Rapid E 2018 model which is expected late 2017 and would have incorporated the latest LeTv Internet of the Vehicle (IOV) system. It is uncertain how the breakdown in the partnership will impact on the release of the performance saloon.

Recently we reported that LeEco, the Chinese equivalent of Netflix and parent company of two EV start-ups, Faraday Future in the USA and LeSee in China, was forced to sell its Silicon Valley property, earmarked for its US headquarters. The sale, reported by Reuters, to Chinese property developer, Genzon Group, will provide the company with $260 million much-needed cash.

Both EV start-ups are known for making bold statements and big ticket announcements just to be followed by press reports of cash flow and funding problems. The announcement comes at a time when Faraday Future is battling to break ground on its plant in Northern Los Angeles. The company could not even pay the $21 million deposit to Aecon despite being offered $300 million by the local authorities for building the assembly plant there.

The 13-year-old LeEco is financially pressed on all fronts and founder, Jia Yeutling, was quoted by insiders referring to the cash flow problem as a “big company disease.” Rumors have also been flying that it was exciting its India operations and shares in its flagship unit, Leshi Internet Information and Technology Corp Beijing lost 25% of its value in five months. LeEco, which products include consumer electronics and cellphones, such as the LePro phone were able to raise $2.2 billion from Sunac China Holdings, a property developer. The funds are however not earmarked for LeEco‘s electric car division. Faraday Future is said to hold the patents to the technology, but recent reports state that the technology is in fact held by a separate company in the Cayman Islands, creating insecurity for investors and borrowers.

One might assume that an icon such as Aston Martin also took the reputational risk in consideration when entering into a partnership with an unproven start-up, but it seems Chinese cash was the deciding factor. The partnership was concluded at a time when a number of partnerships and equity transactions between British car makers and Chinese companies were entered into. Other transactions included investments by Geely in the London Taxi Company’s EV plant at Ansy, and Shanghai-listed Far East Smarter Energy Group investing in UK-based Detroit Electric for the manufacturing of the SP:01 EV. The transactions strengthen both the UK and Chinese positions in the electric vehicle market and created over 1,400 UK jobs.