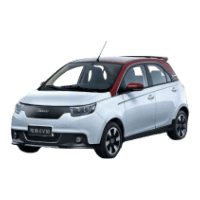 Dearcc launched its luxury brand in Beijing on the 31st of July 2018. The brand named ENOVATE is expected to unveil its first EV, an SUV in October 2018.

Dearcc unveiled its updated E10 mini EV at the 2018 Beijing Auto Show this week. The updated Dearcc E10 range is improved by 115km.