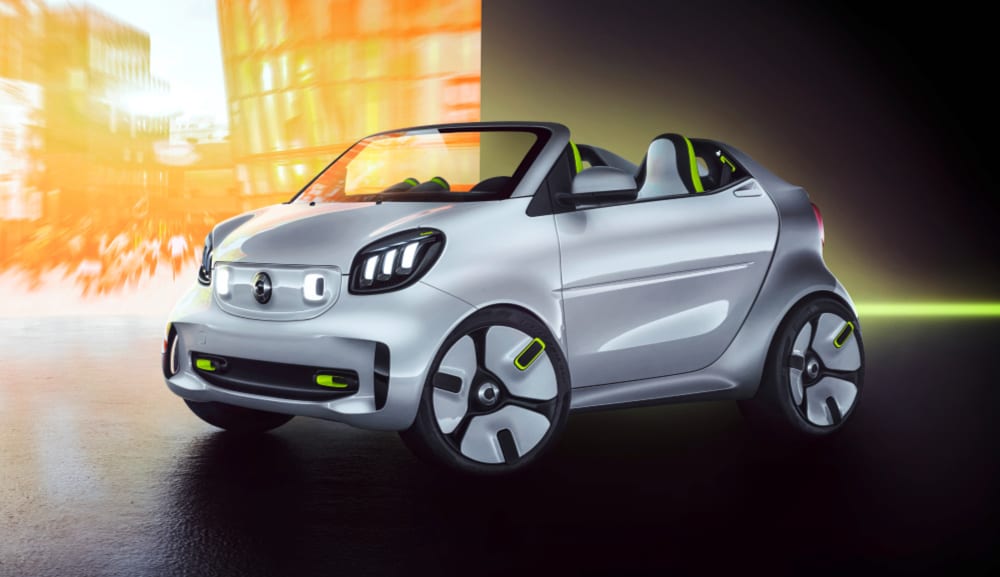 The Paris Auto Show kicked off this week featuring a number of electric vehicles we are already acquainted with including the Mercedes EQC, Audi e-Tron Quattro and the Tesla Model 3.  The French auto manufacturers used the event on their home turf to “wow” and “surprise” us with their line up of future EVs and a look into their strategies. The PSA brands Citroen, DS, and Peugeot showcased the EVs they digitally unveiled in the weeks prior to the event. The DS 3 Crossback is the only pure electric model with a confirmed production schedule in 2019 with the rest of the line-up plug-in conversions of existing models and concept vehicles.

One of the most exciting vehicles at the show is the Peugeot 504 e-Legend 100kWh pure electric coupe, unfortunately, it just a concept vehicle. Peugeot also showed its plug-in models, the 3008 compact SUV and 508 sedan and station wagon that will enter the market in 2019.

Renault Chairman and CEO Carlos Ghosn announced the release of a new affordable urban EV, the Renault K-ZE which will be available in 2019, although only to the Chinese market at first. Mr. Ghosn also announced the electrification of existing model ranges in the form of a Hybrid Clio and plug-in hybrid Megane and Captur. The electrification of the three existing models will start in the 2020 product refresh cycle. Renault also left the door open that these models could get pure electric drivetrains.

The Renault K-ZE will be assembled by the French company’s local partner Dongfeng at the company’s e-GT New Energy Automotive Co, a JV with Nissan. The K-ZE A-segment EV is to have a range of 250km NEDC and equipped with luxuries such as rear parking sensors, rearview camera and a central screen with connected navigation and services.

BMW AG Chairman of the Board of management, Harald Krüger highlighted in his address that by 2021 BWM will have five fully electric core models. Mr. Krüger confirmed that the fifth vehicle will be the BMW i4 which will enter production in 2021. The BMW i4 will follow the Mini Electric (2019), BMW iX3 (2020) and BMW iNEXT (2021). BMW also showcased the new 120Ah BMW i3, the company’s first commercially available battery electric vehicle. It was confirmed that the BMW i3 REx is to be phased out with the model not available to the European market.

Daimler’s smart celebrated its 20 anniversary at the Paris Motor Show with the smart forease show car, interpreting and embodying the fun urban driving brand. The smart forease is based on the standard-production smart EQ fortwo cabrio and can, therefore, be driven.

Mazda announced its connectivity and electrification strategies this week. The strategies are based on the Japanese auto manufacturer’s long-term vision named “Sustainability Zoom-Zoom 2030”. The company said that it will leverage its alliance with Toyota in the development of connectivity and that it will introduce electric vehicles in regions where energy is derived from a high percentage of clean resources. Mazda whishes to reduce its corporate “well to wheel” emissions from 2010 levels by 90% in 2050. Mazda, which does not have a huge capital base will include electrification in some form in 95% of its internal combustion engines by 2030. The Mazda EV strategy targets the production of battery electric vehicles that will account for 5% of its output in the same timeframe. Mazda will also use its patented rotary engines to produce range-extended EVs.

Design and engineering teams of the Australian automobile import brand Holden unveiled a virtual concept electric hypercar this week on the 50th anniversary of Holden’s first win at the Bathurst. Holden, a GM company, does not manufacture vehicles anymore and therefore does not take part at Motors Shows decided to use virtual development to showcase its prowess.

Holden’s design chief, Richard Ferlazzo said “The cessation of Motor Shows in Australia left a hole in our automotive culture in some ways and we lost a forum to showcase our passion and creativity to the Australian public with physical concept cars. However, with the realism and detail achievable through modern technology, I felt we could still deliver uniquely Holden concepts via virtual technology and digital media.”

The Holden Bathurst Time Attack hyper EV with its 25kWh Graphene Hybrid Power Pack and 4 x 250kW electric motors completed a simulated lap of Mount Panorama in 1 minute 29.3 seconds. The reconfigurable battery pack can be charged in 90 seconds with a 1000kW, 800V, 1250A charging system. The Bathurst Time Attack produces a max lateral G-force of 6.5G and max braking G-force of 6G. The hypercar is equipped with an Advanced Driving Assist System through an augmented reality helmet, showing essential technical information and racing line and braking zone benchmarks in 3-D.

On Holden’s strategy, Mr. Ferlazze added “Automotive Design and Engineering remains a core strength and competitive advantage for Holden and for Australia. The Time Attack Concept racer is an illustration of how we can utilise cutting-edge technology to develop transportation solutions for the future. You can see from the extremely detailed approach to incorporating the advanced technology in our Time Attack Concept racer that this is more than just a visual exercise. Holden’s recent announcement of the expansion of 150 new engineers to our Advanced Vehicle Development team means we have the talent, resources and technology to continue delivering to that charter.”

The Bathurst Time Attack now joins other real-world hypercars with 1 megawatt power output such as the Toroidion from Finland and the Rimac C2 from Zagreb, Croatia.

BMW AG Chairman of the Board of management, Harald Krüger announced at the Paris Auto Show this week that the company sold more than 100,000 electrified vehicles worldwide by the end of September, surpassing the benchmark three months earlier than 2017 taking the company’s total plug-in and pyre electric sales to 300,000. But in the same week, US auto sales figures for September showed that BMW and other auto brand’s were trashed by the Tesla Model 3, selling more than ten times its closest rival, the Toyota Prius in the same month. Tesla confirmed that it delivered more than 83,000 Model 3’s in the third quarter of 2018. Taking out the Tesla Model 3 from 2018 EV sales data shows that other brands have shown no significant increase. It’s not just EV sales but the whole sector that’s experiencing pressure from the Model 3. BMW’s USA chief, Bernhard Kuhnt, admitted in an interview aired on Bloomberg that Tesla is putting pressure on the BMW 3 series’s market segment.

AUTONOMOUS NEWS OF THE WEEK

Renault unveiled its robo-vehicle, the EZ-ULTIMO, this week completing its trilogy of concept robo-vehicles introduced this year. The EZ-ULTIMO follows the EZ-GO public transporter and EZ-PRO last-mile delivery vehicle. According to Renault the EZ-ULTIMO is a robo-vehicle equipped with level 4 autonomous driving capability and designed for urban environments and highway infrastructure, such as going to an airport or from a hotel to a tourist site. Last month Volvo introduced a similar concept the Volvo 360c with the difference that Volvo identified a niche competing with short-haul air travel.

The US-based Consumer Reports published it’s first ranking of Automated driving systems this week placing the Cadillac CT6 Super Cruise on the top of the list ahead of the Tesla Auto Pilot followed by Nissan Pro-Pilot and Volvo’s Pilot Assist. Tesla came out tops in one category, namely “Capability & Performance”.