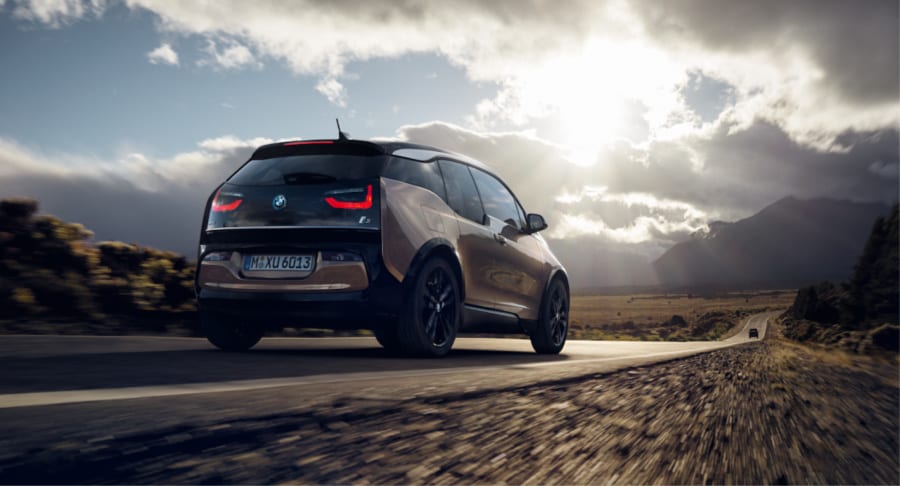 BMW announced the specifications and production start date of the much anticipated 120Ah BMW i3. Being one of the popular EVs there were huge expectations for the Top 10 selling electric car. BMW announced that production of the 120Ah BMW i3 will start this November and that it will be available in the pure electric and range-extended i3 REx version, although only for the US market. It was initially rumored that BMW will can the REx due to expectations that the range of the pure electric will reach 180 miles. BMW set the expected pure electric EPA range of the 2019 i3 at 153 miles and has yet to release the total range of the REx but expects it to be similarly improved. The 2019 BMW i3 gets a 42.2kWh battery pack (37.9 available) which is 30% more in range and capacity indicating that improved battery performance was directed towards onboard luxuries. The BMW i3 now gets the optional iDrive 6.0 Navigational Professional as a standard feature. The BMW i3 is also for the first time equipped with a Wi-fi hotspot for 10 devices and a mobile wireless charging tray. The improved battery technology allowed BWM to make 90% of the battery available compared to 81% in the 2018 range making the 2019 i3 cheaper to charge. It will cost around 2.5c per mile to charge the 2019 model compared to 3.1c based on a utility rate of 10c/kWh. No pricing was announced yet for the 2019 model but I don’t expect it to change significantly from the current levels.

Judging from feedback to the release of the 2019 i3 specifications on social media it seems that BMW missed the mark slightly. Comparing the BMW i3S (2018) price of $47,650 with the base version long-range Tesla Model 3 at $49,600 which has double the range of the 120Ah one would have at least expected that BMW upgrades the charging capabilities of the i3. One of the biggest criticism against the 2019 i3 is that its fast charging is limited to 50kW which would have made ICE competitive long-distance travel possible.

In the last two weeks, the PSA Group unveiled the Citroen C5 Aircross SUV PHEV concept, the DS 3 Crossaback e-tense pure electric car and the Peugeot e-LEGEND EV concept as it warms up for the Paris Auto Show. This week saw listings from Peugeot and DS. Peugeot launched plug-in electric versions of the Peugeot 508 sedan and station wagon and the Peugeot 3008 compact SUV. The Peugeot 508 HYBRID drivetrain can now operate with zero emission with the help of an 11.8kWh battery pack and 80kw (110hp) electric motor. The Peugeot 508 PureTech petrol engine with its 132kW (180hp) output and the electric motor provides a combined maximum power of 165kW (225hp) and emits less than 49g of CO2/km (WLTP). The Peugeot 508 HYBRID is available in three trims, Allure, GT Line and GT and has a range of 40km (25miles) in the WLTP cycle.

The Peugeot 3008 plug-in electric version is first offered as a 4×4 called the HYBRID4 followed later by a HYBRID version, using the same powertrain as the Peugeot 508 HYBRID. The PEUGEOT 3008 HYBRID4 employs a 13.2kWh battery pack offering a range of 50km (37miles) in the WLTP cycle. Peugeot’s electric platform allows for a top speed of 135km/h (85mph) and the PEUGEOT 3008 HYBRID4 accelerates to 100km/h in 6.5 seconds powered by two 80kW (110hp) electric motors. The HYBRD4 model is only available as a high-end GT version with a Greval Grey trim. The Advanced Driving Assistance System of the Peugeot 508 is also now available in the 3008 HTBRID4 providing adaptive cruise control with Stop & Go function and traffic lane assistance. Peugeot’s new plug-in drivetrain utilizes the new e-SAVE feature, allowing the car to operate in electric mode whenever possible. The plug-in drivetrain is also equipped with the new i-Booster regenerative braking system.

DS Automobiles unveiled the DS 7 Crossback E-tense plug-in electric vehicle which is the first electrified model to emerge from its EV strategy. The D7 Crossback E-Tense 4×4 is a Premium C SUV with two electric motors added to its combustion engine delivering a combined 300hp and 450 Nm torque. The D7 sequences 50km (38miles) out of its 13.2kWh battery pack on the WLTP cycle which is around 60km on the old NEDC cycle. The D7 charges within two hours using a 6.6kW wall mounted terminal (32A) or 8 hours with a traditional socket.

September marks the start to the use of the Worldwide harmonized Light vehicles Test Procedure (WLTP) regulation replacing the New European Driving Cycle (NEDC) and with it came tighter emission controls in Europe. One the WLTP calculation the effect of a fully charged battery is reduced resulting in higher emission data for some plug-in electric vehicles pushing it above 50g/km which is required in some European countries to qualify for tax subsidies. As a result Mercedes, VW and Porsche called a halt to sales of top selling PHEV models while Volvo and BMW continued with selling the XC60 and 225xe despite losing access to incentives. Consumers will only be able to buy the VW GTE’s in the second half of 2019 when the new version is released. A VW spokesman said that they have a backlog in testing and prioritize cars according to popularity, leaving the PHEV’s in the back off the line. Mercedes will bring qualifying S and E series to market in about two months while you can already pre-order the BMW 5 series with a WLTP CO2 rating below 50g/km. The Mitsubishi Outlander, which coincidentally is best selling PHEV in Europe is also the only PHEV currently available with an emission rating below 50g/km, clocking in at 46g/km.

Hot on the heels of EV start-up Lucid Motors announced last week that it acquired $1 billion in production funding from the Public Investment Fund of Saudi Arabia the company this week announced an agreement with Electrify America. The preliminary agreement will allow Lucid Air drivers access to 500 350kW ultra fast charging stations across 40 states. The figure of available stations is expected to increase once the Lucid Air is available in 2020. The Lucid Air is potentially one of the luxury EV models that will truly provide a challenge to the Tesla Model S should the new company be able to produce in significant numbers. Access to a fast charging network will assist Lucid in providing meaningful competition to Tesla and other luxury car makers. 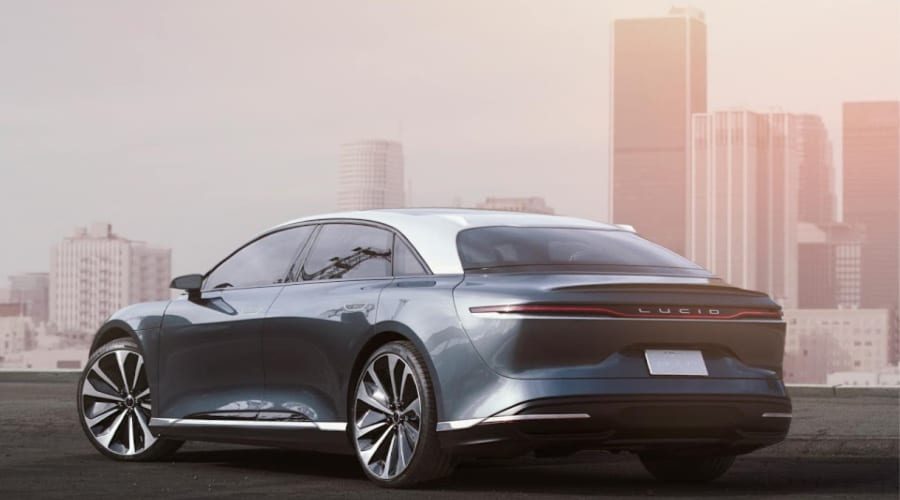 Faraday Future has been ramping up its operations after receiving a capital injection from China Evergrande Group. The company based in China and the USA announced this week that it will commence with sales of the FF91 luxury crossover in the first half of 2019. The order book for the launch edition of the FF91 named the “FF Futurist” will start for the US market produced at the leased plant in Hanford California sometime in the first half of 2019 while

Unconfirmed media reports in China speculated the follow up to the FF91 the FF81 will be introduced at a price starting from RMB300,000. The FF81 will retain the design language of the FF91 and some of its performance.

Faraday Future also announced recently that it has attracted a new wave of talent as engineers from other automakers such as Tesla, Honda, GM and Ford joined the team at its Hanford plant.

The EV market is not what it was two years ago when I started the newsletter, at the time one get barely get five important topics to cover. Now its impossible to select the top five news events without missing some important content so I hereby list topics which are equally important without delving deeper.

Tesla co-founder Elon Musk entered into a settlement agreement with the SEC which earlier opened a complaint against him for his tweet about taking the company private. The complaint was seen as a roadmap towards a criminal case which could see Mr. Musk behind bars. This morning it was reported that Elon Musk agreed that he will pay a fine of $20 million and step down as Tesla Chairman. One would have hoped that it would have been better for him to stay on as Chairman and rather give the grueling task of auto company CEO to an auto sector insider but I guess its more important for Elon to show the world he can deliver on his dream and don’t forgot his sizeable recent share option agreement.

VW Head of Product Line for E-Mobility, Christian Senger, told Auto Express last week that VW is targeting 100,000 of its mass-market EV, the ID Neo which is expected to be available from 2020. He said that there will be three battery configurations for the ID Neo, starting at 330km (205 miles) at the lower end and an improved mid-level of around 450km (280 miles). Mr. Senger could not provide a range yet for the top tier. It is expected that the pricing for the ID Neo will start from around 25,000, or the current specs of a fully loaded diesel Golf. For more specs click here.

Well, so much for being brief.