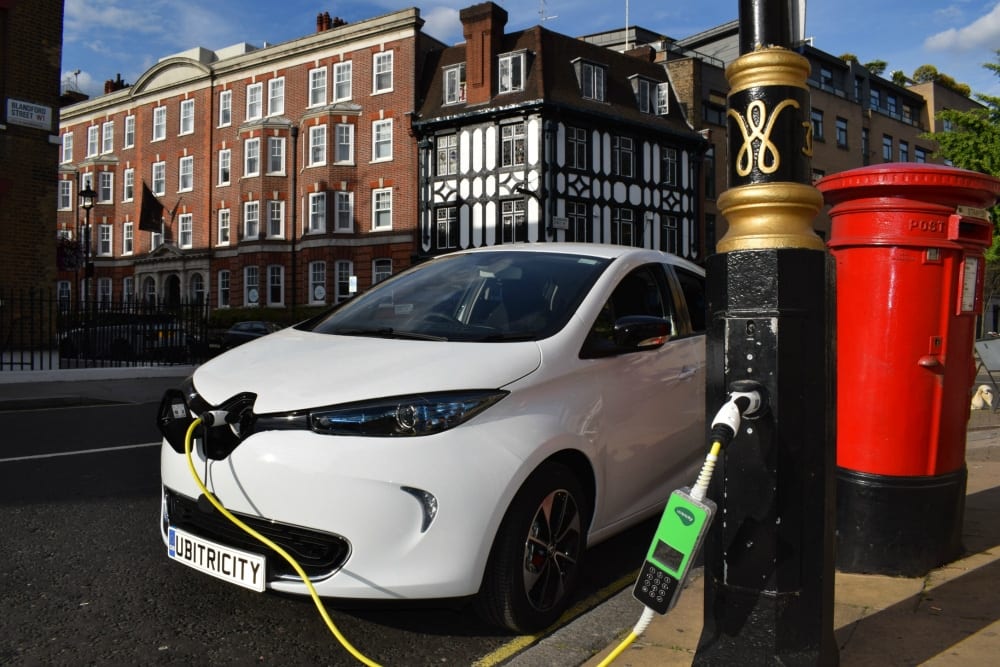 The ubitricity ‘SimpleSockets’ charging system allows a driver to connect to the post with a special cable which identifies the charge point activating it and bill the drivers account. The ‘SimpleScokets’ system has a max output of 4.6kW and drivers are billed at a subsidized rate of £0.15/kWh through a subscription service where the £199 capable is free. You can also purchase the cable outright for £100 but then be charged at a rate of £0.19/kWh. The charge point can also accept standard chargers but it needs to be activated through a mobile application.

The news that China’s best performing EV brand BYD won two bids to supply the State of Georgia and the City of Atlanta with electric vehicles is surprising in the escalating trade war between the USA and China where tariffs on autos are one of the main sticking points. The state and city want to reduce greenhouse gases by 20% in 2020 and 40% in 2030.

The press release by BYD explains the contracts as follows:

The resulting statewide contract will be a “convenience” source for all State of Georgia governmental entities, including but not limited to state offices, agencies, departments, boards, bureaus, commissioners, institutions, colleges, universities, as well as local government, municipalities, cities, townships, counties and other political subdivisions of the State of Georgia. The statewide contract will also be available to other Governmental entities outside of the State of Georgia.

BYD won the bid to become one of the suppliers for the city of Atlanta’s electric vehicles, which includes electric heavy-duty trucks, taxi fleet vehicles, and buses. Departments from the City of Atlanta will be able to purchase from this contract, which will ensure competitive pricing and quicker deployment of the zero-emission battery-electric vehicles. Furthermore, outside agencies will be able to purchase vehicles under a co-operative agreement with the city.

BYD which list Warren Buffet as a shareholder has a bus assembly plant in the USA and previously tried to bring the BYD e6 taxi to the country.

One can’t be blamed for being confused when reading press announcements by Faraday Future and its shareholders the past week. A press release on the Faraday Future (FF) website dated August 16 states that the company does not have any plans to move its global headquarters to anywhere outside of California and goes further providing reasoning why it will not change. FF spawned from the Chinese online video service provider LeTV and its controversial founder Jia Yueting ran into financial trouble. The company was bailed out in June by Chinese property giant Evergrande Health Industry Group which acquired 45% in the company. The white night shareholder Evergrande announced this week that Evergrande Faraday Future Intelligent Vehicle (Guangdong) Co., Ltd which acquired a 401,000 square meter piece of land in Nansha District, Guangzhou will establish FFs operating HQ in China. The company aims to produce 5 million vehicles over the next ten years such as the FF91 and FF81 electric vehicles based around a connected intelligent mobility ecosystem. Evergrande Faraday Future stated that it would achieve its goal through the development of five R&D and production bases throughout China. Although the Chinese base is labeled as “Operational” HQ in the country a poisoned pill in the funding arrangement by Evergrande Health could see the global HQ shift to China. According to the agreement should FF founder Jia Yueting not be able to bring the first batch of FF91’s to market in Q1 2019 he loses his majority shareholding, giving control to Evergrande Health. At the end of July FF announced that it completed the first body of the FF91 at its Hanford California plant, ahead of its own timeline objectives. The company said that it expects to deliver its first vehicles in December 2018.

Chinese EV start-up NIO filed its prospectus for an IPO in the USA this week. The filing documents provide some insights into the company’s product planning. According to the prospectus NIO plans to bring at least five EVs to market by 2023, covering a range of segments including a sedan and MPV. In Week 31 we showed leaked images of NIO’s next EV the ES6 a mid-sized SUV due early 2019. NIO released its first model the ES8 in July. The ES8 competes directly with the Tesla Model X and sold a respectable 1,331 units in its first month. The NIO ET7 sedan will follow the ES6 in 2020. The proposed IPO is set at $1.8 billion (12.48 billion yuan).

In the meantime on of NIO’s competitors in China, XPENG announced at its brand day on 15 August that it aims to raise 30 billion yuan by the end of 2019. Xpeng announced the launch of its first EV the G3 in April 2018 and set a price range of between ¥200,000 and ¥280,000 for its smartphone on wheels. The company has sold 300 pilot models of the G3 to staff and will unveil the final configuration and price in November. Xpeng is valued at 25 billion yuan after a series B and B+ funding round which totaled 6.2billion yuan. Xpeng will open 10 showrooms in cities such as Beijing, Shanghai, Guangzhou and Shenzhen in Q4 2019. Xpeng took a page from Tesla’s playbook and plans to develop its own charging infrastructure consisting of 1,000 superchargers and 10,000 AC charging points over the next three years.