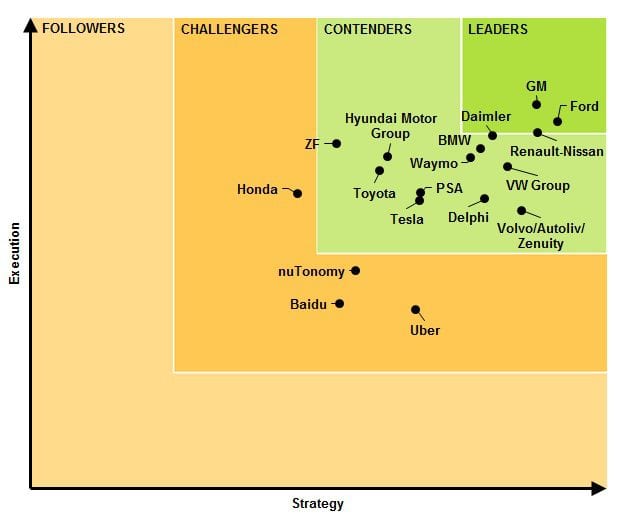 Navigant Research placed Ford and GM at the top of its autonomous driving leaderboard, surprisingly far above Waymo (7th), the pioneer of autonomous driving. Waymo was only listed as a contender, and Tesla who has already clocked over 300 million miles in Autopilot (Level 2 Autonomy) did not make the Top 10 list. Waymo, not aiming to develop a car, but rather focusing on autonomous technology has partnered with Chrysler and Ford on testing autonomous technology.Making Navigant’s findings even more surprising to us is that

Making Navigant’s findings even more surprising to us is that Waymo performed exceptionally well compared to other automakers on the list when comparing across all permit holders allowed to test autonomous tech on Californias public roads. According to CA DMV regulations, each permit holder must annually file a disengagement report, reflecting the number of events where a driver essentially has to take over from the vehicle’s autonomous mode to either prevent a traffic incident or where the system fails. Waymo posted a record 0.2 disengagements per 1,000 miles in its 2016. For a breakdown of each permit holders testing in California read our recent blog providing detailed analysis. The table below shows a summary of all the permit holders in the CA DMV program’s disengagements per 1,000 miles.

Navigant’s criteria are based on the following ten factors:

The Top Ten Self-driving companies on Navigant’s list is:

Despite Tesla aiming to have a market ready Level 5 autonomous product by the end of the year, it is only listed as a contender. Tesla is criticized by some, for being too aggressive, using its customers as guinea pigs for its AutoPilot software.

Not surprising though is that Uber features on the bottom end of the list, the controversial ride-hailing company has been in the news lately for losing its right to test in San Francisco, being sued by Waymo and a crash in Tempe, Arizona, temporarily halting its pilot program.