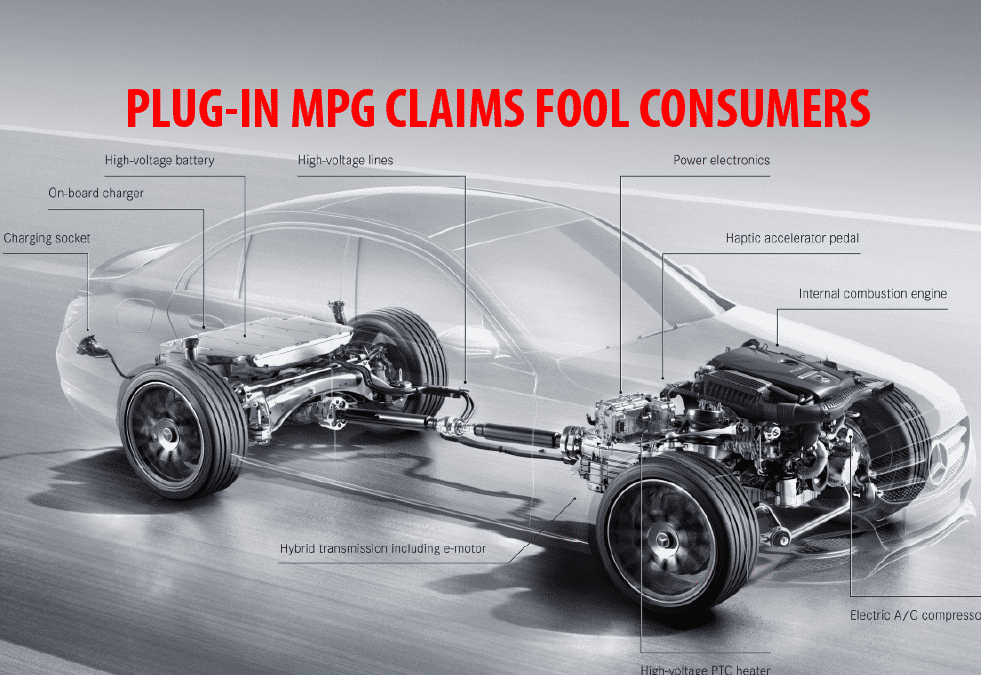 wattEV2buy is two years old this week, and I would like to use the opportunity to thank everybody that has been part of the journey and for the visitors to the site. Seeing the readership reach new records each month give me the inspiration to improve and makes the hours invested all worthwhile. wattEV2buy will grow this year with our EV-Genius mobile app offering currently in development. I am looking for co-founders from the retail space in California, New York or Europe so if you are interested, please reach out to me.

My personal opinion regarding plug-in hybrid EVs has always been that it does not make sense to buy a luxury vehicle an then stuff a fuel tank of a Hyundai i10 in it to make space for a battery pack that will give you half the range of a Mahindra electric rickshaw while paying a premium for it. PHEVs are essentially a compliance technology for manufacturers to play catch-up with those companies (or should I say company until recently) that have a pure electric strategy. I guess this statement will result in bundles of fan mail, but then again I have the luxury to say what I want since I pay my own rent. Sure PHEVs are a great bridging technology for consumers to ease them into electric vehicles, many PHEV owners drive in EV mode most of the time and will buy a pure electric vehicle as their next vehicle. Now back to the point before I digress.

British consumer-led motoring platform, HonestJohn.co.uk this week reported that 98% of hybrid car’s fail to live up to their sticker MPG with some models missing the mark by as much as 80MPG. HonestJohn based its report on real-world fuel data from 148,00 submissions on its site.

The worst performers according to HonestJohn are: 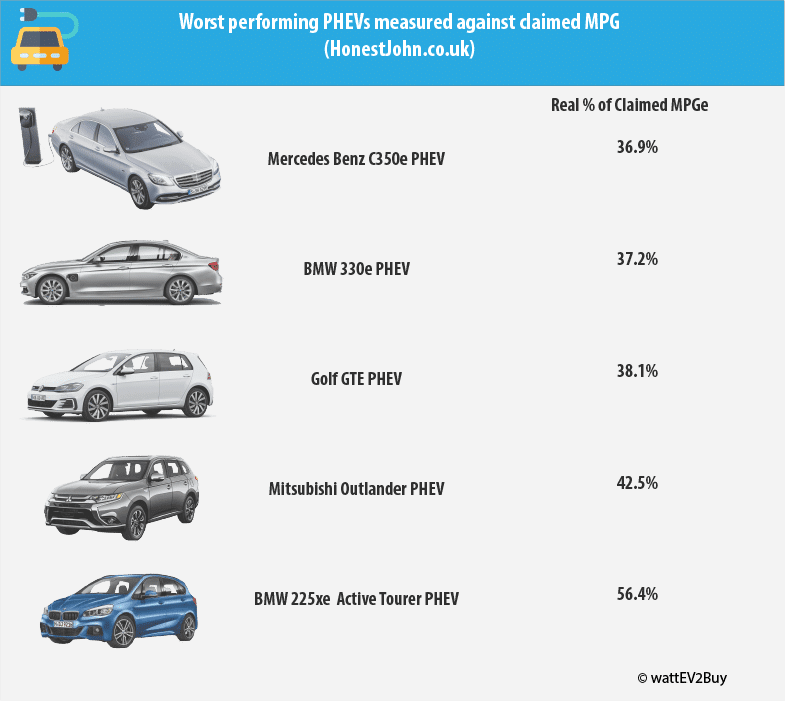 Honest John’s Managing Editor, Daniel Powell, said: “This is the most comprehensive study into hybrid fuel economy ever to be carried out. However, while these models are advertised with lofty MPG figures that will appeal to cost-conscious drivers, our research shows that on-the-road economy is somewhat different.

“Given that car buyers are being urged to replace their petrol and diesel cars with new low emission hybrids, we think more needs to be done to ensure drivers get a fair deal when it comes to Real MPG.”

KIA unveiled the Niro pure electric EV at the 2018 Busan International Motor Show in Korea this week. The KIA Niro CUV EV and sister company Hyundai with the Hyundai Kona EV currently has the only pure electric CUVs in the (Western) market. The Niro EV differentiates itself from the existing Niro Hybrid and Niro Plug-in Hybrid with a series of exclusive design features including redesigned intakes; new arrowhead shaped LED daytime running lights and “tiger nose.”

The inside of the Niro EV includes technologies that complement its zero-emissions powertrain and modern features. Different than the PHEV and Hybrid Niro, the BEV version’s dashboard features a light blue trim, and the center console has been simplified to accommodate the car’s shift-by-wire drive selector in the form of a ‘dial’-style shift knob, a first for KIA. The Niro EV features a new mood lighting system. Occupants can choose from six colors – white, grey, bronze, red, green, and blue. The 7.0-inch touchscreen HMI (human-machine interface) remains at the center of the dashboard but has been updated to offer a series of EV-specific features. Most importantly the range of the short and long-range versions is slightly more than indicated in the digital launch in March, with the long-range version reaching 400km (250miles) and the short-range model 300km / 186 miles. For more specs and some other surprises related to the Niro EV click here.

Renault announced that buyers can now purchase the Master ZE and Kangoo in full. The full purchase price will be €7,400 (VAT excluded) more than a model with a battery lease agreement across all variants.

Renault ensured that its staff received comprehensive training in electric vehicles, allowing sales teams to better inform customers on the various battery purchase and leasing options available for KANGOO ZE and MASTER ZE. Renault is the leader of the electric utility vehicle in France in 2017 with a 53.6% share of the market.

Peugeot will release a plug-in hybrid version of its stunning new estate the Peugeot 508 SW in the second half of 2019. Unfortunately, the Peugeot 508 will only be available in Europe. The 508 SW PHEV will have a range of 50 km (WLTP cycle) from a battery pack located under the row 2 seats to preserve the roomy boot.

The Honda Urban Concept, which will reach production for the European market in 2019, this week was awarded ‘The Best Concept Car’ in the renowned 2018 Car Design Award honors presented as part of the Turin Motor Show.

Tesla had its annual shareholder meeting this week which included the expected tweets from Elon Musk. The most exciting news from the AGM related to the 2019 Roadster, Model 3 and Model Y CUV.

Elon Musk tweeted that the Roadster 2019 will include 10 SpaceX rockets to “dramatically improve” acceleration, braking, and cornering. The SpaceX version will outperform the standard Roadster with its 0-62mph 1.9-second acceleration.

Tesla also teased a new picture of the Model Y CUV which it will reveal on the 15th of March 2019 for production early 2020. Elon Musk also noted that the Model Y’s interior would not include leather, not even a steering wheel eluding to possible autonomous capabilities for the mass market CUV. I assume the only impediment will be regulation for this statement to be true.

The most explosive news was the tweet by Elon Musk showing that the Tesla Model 3 is now the best selling mid-size premium sedan in the USA for all propulsion types. The news followed by statements from Elon that Tesla would most likely reach its target of 20,000 units per month caused the share price to rise 9.5% up 15% from its low in April, which was the best one-day performance since November 2015.

Last year I made some good calls on the Tesla share price including the break at $280 and the top at $385 so let’s hope I remain on form (I take no responsibility for your investment decisions). Looking at the long-term support line and the rising flag forming the TSLA price can rise to above $400 should it maintain a break above $320. Take note of the short-term flag which can see the price test the bottom support and provide a buying opportunity. Should the share price close higher Monday than on Friday this short-term flag will be negated and a run to $330 can be expected this week. The Tesla share price upward rallies is also caused by the stock being heavily shorted. 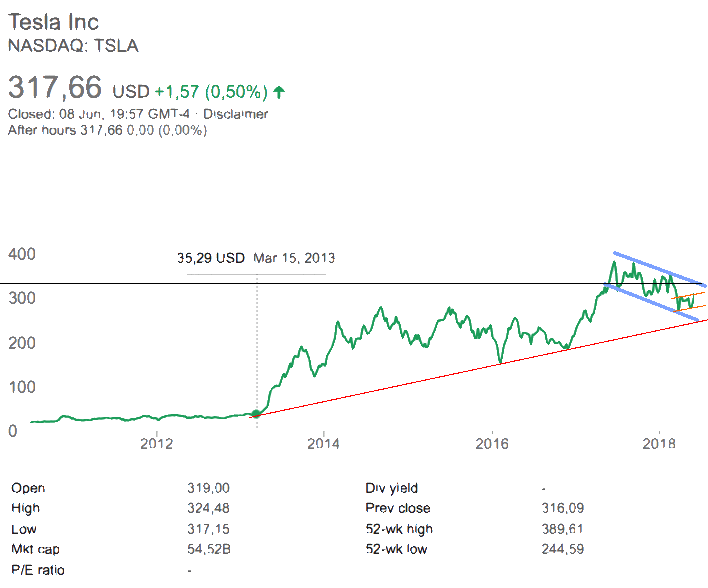 General Motors announced this week that it would intensify its electrification strategy in China. Automotive News China quoted GM’s China head Matt Tsien, who said in Shanghai on Tuesday that the automaker will now develop 20 heavily electrified vehicle models through 2023. The plan to build 10 EVs by 2020 will be bolstered by a further ten models from 2021 to 2023.

In related news, GM and Honda extended their EV partnership to include battery development. The company made the following announcement this week:

Daimler unveiled two more electric trucks for the North Amercian market during its Capital Markets and Technology Days in Oregon this week, claiming that it now has the largest selection of electric delivery vehicles. Maybe now is to strong a word since these models will all only be available in volume form 2021. The company will test 30 of its new Freightliner eCascadia Semi and Freightlines eM2 106 medium delivery trucks over the next year. Follow the links below to see how Daimler will come head to head with the Tesla Semi.

In related news, the Chinese owned FDG Electric Vehicles based in California and Ryder announced that Ryder reserved 500 of  FDG’s V8070 medium-duty panel vans. The V8070 has a 100-mile range with a 6,000lbs payload, 16.4 cubic meters of cargo space and 7.2kW onboard charger. Ryder will include the V8070 in its ChoiceLease and SelectCare fleet maintenance offerings. 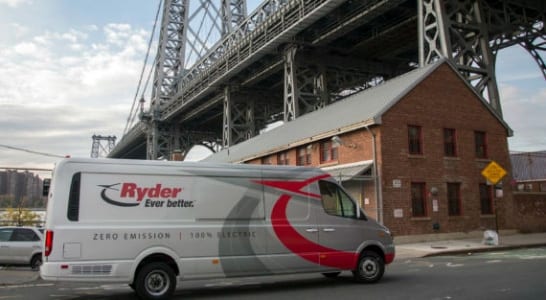