Uber Technologies Inc [UBER.UL] this weekend suspended its testing of self-driving car technology after a non-fatal crash in Tempe, Arizona. The crash, caused by another vehicle when the driver “failed to yield” to Uber’s Volvo while making a turn. Two engineers were passengers in the front cockpit of the driverless vehicle. Uber decided to suspend the testing of its self-driving program in Arizona and Pittsburgh, Pennsylvania.

The company already lost its license to test its autonomous vehicles in San Francisco in February, where the regulators came in possession of footage showing an Uber pilot vehicle running a red light, barely missing a pedestrian. In the incident, the company claimed that it was a driver error. The Californian DMV offered Uber assistance and a clear road to permitting the company and State could not agree on workable rules around Uber’s demand for its technology to be classified as SAE Level 3 automation.

Uber is Piloting retrofitted Volvo XC90 SUV’s and Ford Focus vehicles and recently announced a cooperation agreement with Daimler, where the German automaker will introduce and operate self-driving cars on the Uber network. Uber abandoned efforts to build its own vehicle early on, rather focusing on partnering and acquiring technologies to achieve its goal of a self-driving fleet for its network. Uber acquired autonomous trucking company Otto in 2016 and made a successful delivery of a consignment of beer before being blocked by the California DMV. Otto’s success is unfortunately mired in controversy as Google’s Waymo is suing the company for stealing its technology.

One should think that there was no real need for a drastic move such as suspending the pilot program? Tesla did not suspend its autopilot software when a driver was killed in May 2016. Accidents by driver neglect are the kind of accidents that few drivers can escape and will continue happening while humans are in control of vehicles. The answer rather lies in Uber trying to clean up its act and restore its image. The company has been suffering from a stream of negative publicity lately, with its Chairman, Jeff Jones, a marketing expert hired to improve the company’s image resigned after only 7-months, confirming the rot at the company.

We hope that Uber get its act together and quickly resume its testing, after taking the necessary safety precautions, so humanity can benefit from safer transport in the near future. 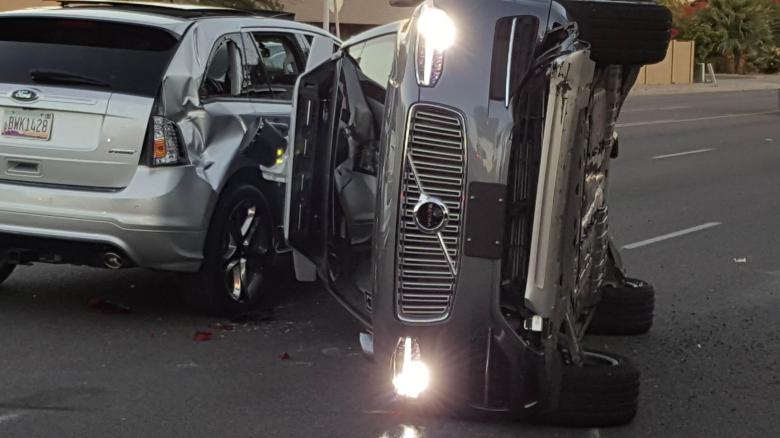 A self-driven Volvo SUV owned and operated by Uber Technologies Inc. is flipped on its side after a collision in Tempe, Arizona, U.S. on March 24, 2017. Courtesy FRESCO NEWS/Mark Beach/Handout via REUTERS