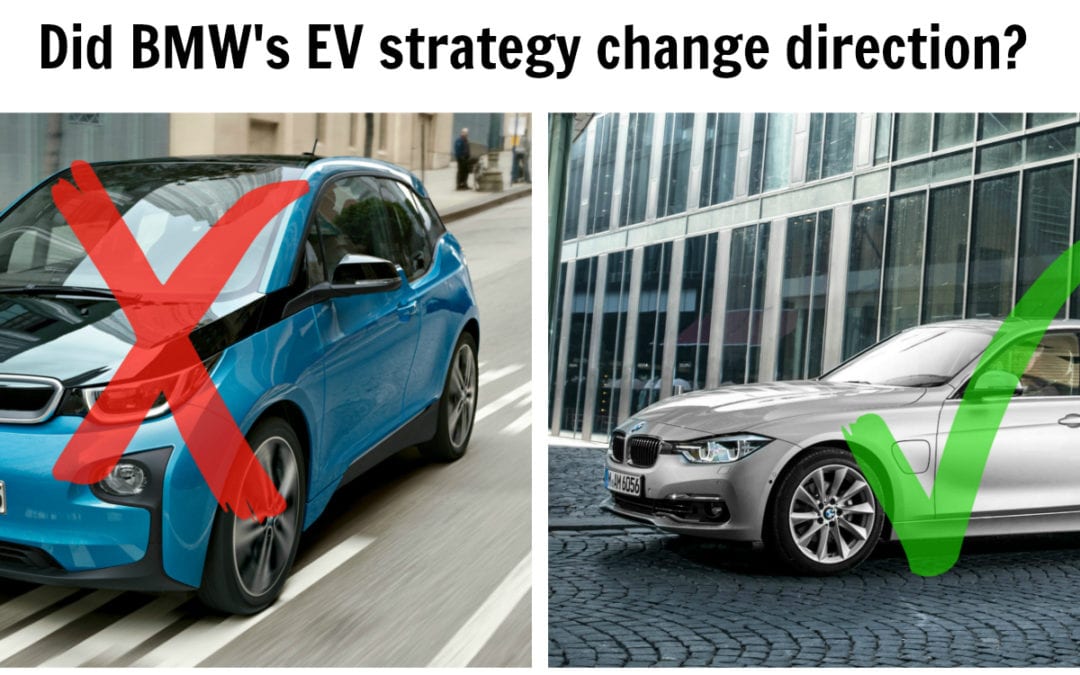 “Our Strategy Number One Next is centred on consequent lightweight construction, alternative drivetrain technology, connectivity, autonomous driving functions and the interior of the future. The iNext will set the standard from 2021″

Only three weeks ago wattEV2Buy reported that the BMW AGM determined that it would start producing it iNext autonomous brand at its Dingolfing plant form 2021.

Unconfirmed online reports this week claimed that BMW would not pursue the development of the BMW i5 as its mass market answer to the Tesla Model 3, but rather follow other carmakers such as Hyundai and Citroën, by offering electric options across existing ranges so that customers can choose a gasoline model or an electric model.

The reason for the change of heart is that the cost associated with the specialized chassis systems of the i8 and i3 makes it unsuitable for high volume production. In March BMW’s reported its lowest profitability since 2010 on the back of spending on technologies to compete with its rivals in the electrification and autonomous sectors.

It seems BMW is struggling to communicate or find a definitive answer to present as its mass market EV solution. In March of 2017, the BMW CEO hinted that the Mini could be automakers mass market EV.

The following statement by Harald Kreuger this week, “The all-electric MINI and the all-electric BMW X3 will mark the beginning of the second wave of electrification for the BMW Group, benefiting from the ongoing technological progress we are making in this area.” is seen to support the reports that the company is having a rethink on its EV Next strategy.

BMW’s change of direction will set it on a different course than its competitor in the luxury car market, Daimler, which has set an aggressive strategy to develop a separate brand to establish a market lead in the e-mobility sector.

The BMW strategy now seems to focus on finding the least cost route of adding batteries to existing models to produce vehicles for consumer’s increasing appetite for electric cars. Adding batteries to combustion vehicles is seen as a cop-out as consumers will be better served by buying electric vehicles built from the ground up around the technology.

Indian based Mahindra and Mahindra this week shed some more clarity on how it aims to compete in the electric vehicle sector. The company announced that it would construct a battery plant in Chakan, Pune City in Maharashtra State which will increase the company’s battery output ten fold. Currently, the company produces only around 500 battery packs a month for its e2O, and eVerito models from imported cells at its Bengaluru plant, the Chakan plant has a target of 5,000 units a month. The Indian company is also developing a high powered electric vehicle platform available by 2019 that is capable of speeds up to 200km/h / 125mph and a range of 350 – 400km (250 miles). The Indian government has set a lofty goal of 100% electrification of the countries vehicle fleet by 2030, but to date, the technology has failed to get any traction that can compare with its peer, China.

US-based research firm Research and Markets this week released a report indicating that they see the EV charging infrastructure market should be valued at around $45 billion by 2025. A rush by governments to encourage the adoption of electric vehicles is seen as the main driver for the uptake of the technology. The research firm also reported on the adoption trends within the charging technology sector, stating that the CHAdeMO connectors would be replaced by Combined Charging System (CCS) as the preferred connector type. The fast charger segment is said to lead over slow or home-based chargers, showing an estimated CAGR of 47.9% from 2017 to 2025.

Research firm Bloomberg New Energy Finance (BNEF) this week reported that it expects EVs to reach price parity with internal combustion vehicles (ICE) in the USA and Europe by 2025. Falling battery prices driving down cost is seen as the main reason behind the conclusion. Currently, battery prices constitute around 50% of an EVs cost, by 2020 BNEF forecast batteries to only constitute between 23% and 16% of an electric car’s total cost by 2030. The report did not compare the total cost of ownership, which is expected to favor EVs this decade already. It is unclear if the study did take into consideration regional factors such as the EU adding as much as $340 per engine on diesel engines from 2020, which should increase the cost of combustion engines.