Ford debuted it’s next-generation Fusion Hybrid Autonomous development vehicle this week. The second generation of the vehicle sports more production ready controls and LiDar sensors on top of an improved computer hardware platform. Improved field of vision on the sensors allowed Ford to have only two sensors as opposed to four in the first generation. The second generation follows the first, introduced three years ago. The company aims to have an SAE Level 4-capable vehicle commercially available by 2021 for ride-hailing and sharing purposes. Ford will also expand its test fleet, currently operational only in California to its home state, Michigan.

The controversial LeEco announced the groundbreaking of its plant in the city of Hangzhou, Zhejiang Province China. LeEco is entwined between Faraday Future and the LeSee electric vehicle manufactured by LeEco. Both companies were founded by Chinese businessman Jia Yueting. Both businesses are known for making bold statements and big ticket announcements just to be followed by press reports of cash flow and funding problems. The announcement comes at a time when Faraday Future is battling to break ground on its plant in Northern Los Angeles. The company could not even pay the $21 million deposit to Aecon despite being offered $300 million by the local authorities for building the assembly plant there. LeEco has also partnered with Aston Martin on the RapidE, where it will help with the development of the zero emission technology. Faraday Future is said to hold the patents to the technology, but recent reports state that the technology is in fact held by a separate company in the Cayman Islands, creating insecurity for investors and borrowers..

In another attack on Tesla by the old guard, as the State of Missouri rejected its dealership license renewal. The reason being a ruling by Circuit Judge Green in a case brought against the Missouri revenue department by the Missouri Auto Dealers Association for allowing the license in 2015. Tesla prefers to use a direct sales model due to the notorious inability of traditional dealers to sell electric vehicles. Tesla will be forced to close shop in the State come January the 1st 2017.

TOP EV NEWS #5 – A scramble for EV resources by miners

Miners are scrambling for “modern” resources such as lithium, nickel, and cobalt used in the electric vehicle manufacturing process. A reporter, Marcus Le Roux explored the various metals and their potential supply constraints and sources in the Australian. Most interestingly are the place which copper plays within the electric vehicle industry and the expectation that current lithium demand would rise from 16,500 to between 120,000 to 250,000 tons by 2025 to feed the 14 battery mega factories that are developed, mainly in China. 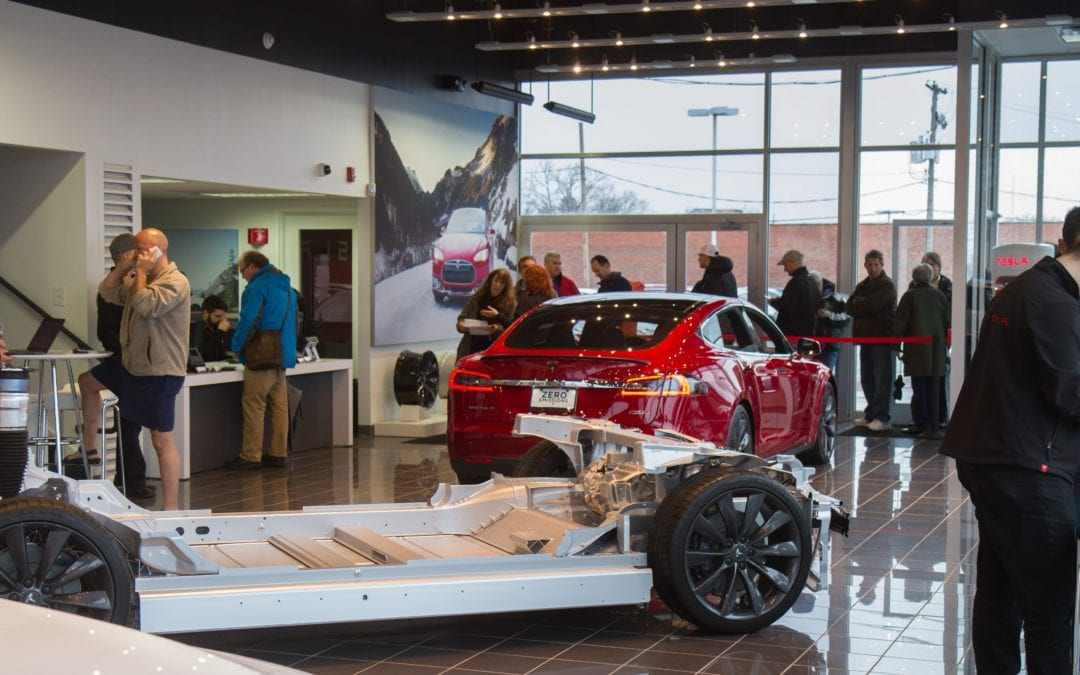 Opportunity for Electric Vehicle Only Dealerships

This month saw the announcement of two electric vehicle only dealerships opening, one in Oregon and one in Canada. The multi-brand EVEN Electric dealerships opened in Ottawa after a successful pilot of the concept in Iceland, started in 2013. The company is in discussions for more locations in the UK, Belgium, Ireland, Canada, Panama and Norway. EVENElectric is also in partnership with EvoCharge, the charging infrastructure supplier, and Microsoft for developing software for its trading and service platform. In Portland, Drive Oregon, the organization charged to promote EV’s, are opening an EV showroom in downtown Portland. Drive Oregon received a grant of a $1M by the US Department of Energy to promote early adoption of EV’s. Both these showrooms host’s multi-brand electric vehicles with the exception of Tesla models, which is exclusively sold through its own outlets.

I always find it fascinating when speaking to people about electric cars that the ones who are the most critical have never actually driven an EV. After a week driving an electric vehicle, it feels that you step back in time having to drive a gas guzzler again. The general adoption of EV’s will follow the same path as other new energy technologies, such as PV. A decade ago people viewed solar panels as unsightly, and now having a PV system on one’s roof is identified as a sign of progress.

The inability and unwillingness of traditional motor dealerships to promote electric vehicles are creating opportunities for forward thinking entrepreneurs to open electric vehicle only dealerships. The Sierra Club’s recent Rev Up EVs report on the consumers EV purchase experience identified that traditional dealers, especially outside of California are not promoting the technology. One of the key findings were that automakers still provided higher commission structures for gas guzzlers. But the problem was not only on the manufacturer’s end. Common problems identified at the dealership level included dealers not even having EV’s on the lot, vehicles not charged and most importantly in my opinion, that the sales people were not educated on the technology. During test drives, they could not even explain to the prospective buyer how to charge the vehicle. From my experience shopping for an EV, it was clear it’s not the consumer holding back the growth of EV sales, but the dealership’s and automakers.

Sure, traditional big dealerships have strong relationships with the automakers, giving them an edge when negotiating terms and allocations, and the market will get to a point by the end of the decade where EV’s would be promoted by the auto sector. Most auto manufacturers changed their strategy by early 2016 and committed to having plug-in models constitute between 25 and 50% of their product mix between 2020 and 2025. Since purchasing a vehicle is driven in part by emotions, an auto brands marketing efforts are just important in driving sales as its technology. You can bet your bottom dollar, once regulation as we see being put in place by California and China, setting EV sales targets as a percentage of total sales, we can expect the big marketing divisions mobilise their resources to push EV’s onto the consumer.

But who would you rather trust? The dealer that just a year back told you how bad electric cars are, but now tries to sell you one at all cost due to targets from the automaker? Or the dealer that has in-depth knowledge and care about the success of the technology to secure repeat business? You will not normally see lines of customers, more associated with the launch of a new iPhone, in front of a traditional auto dealer.

Doing a back of the envelope calculation based on Even Electric’s announcement that it sold 100 vehicles in a short space of time, and due to supply constraints could not fill a further 200 orders, and we assume that it was for the period 2014/2015. If we then compare it with total EV sales for Iceland for 2014/2015 which was only around 600 vehicles. We can derive if EVENElectric had stock, they would have supplied 50% of all electric vehicles. Not bad for a startup having to compete with established dealerships.

It is clear from the state of affairs that the environment is ripe for disruption in a sector which for decades have been controlled by a few big players, secure in their complacency. Providing opportunities for entrepreneurs and businesses that truly believe in the future of electric vehicles.

wattEV2Buy in its mission to promote the adoption of EV’s have started an online classified section to promote a secondary market in EV’s and also an investment section where investees and investors of new electric vehicle technologies can meet. wattEv2buy is also developing an EV platform based on the Internet of Vehicles.