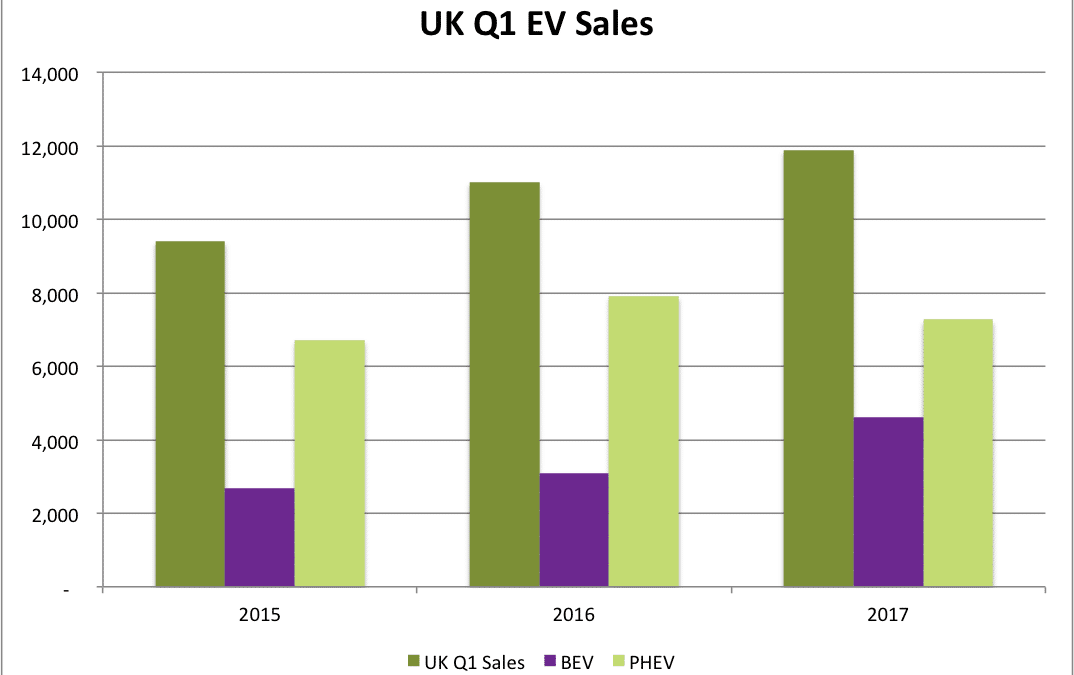 The improved performance of BEV vehicles compared to Plug-In Hybrid Electric vehicles (PHEV), showing a decrease of 5% to just under 5,000 units, corrects a trend since 2016 which saw 3-in-4 electric vehicles in the UK being PHEV’s.

All indications are that UK EV sales will breach the 100,000 unit mark, shared with only 7 other countries within the next couple of months. Recent surveys in the UK showed that most vehicle buyers are negative towards diesel vehicles due to diesel gate, a spectacular own goal by big auto and that 85% of vehicle owners now consider buying an EV, subject to them overcoming these EV related misconceptions.

VW sister companies, Audi and Porsche, to accelerate their respective electric vehicle strategies, this week announced that they would jointly develop a shared electric vehicle platform allowing the automakers a faster route to electric, connected and autonomous technology. The partnership will last til 2025. The German based VW Group‘s electric vehicle strategy is built on its MEB electric platform architecture, while Porsche targets the delivery of its first electric vehicle, the Mission E by 2020 and Audi, an electric SUV based on the e-Tron Quattro by 2018. Both vehicles will have various degrees of autonomy as part of its offering.

The Chairman of Indian automaker Mahindra and Mahindra, Anand Mahindra announced at the Seoul Motor Show this week that Mahindra and its Korean subsidiary SsangYong aims to develop a luxury electric vehicle by 2019, targeting entry into Chinese and US markets.

Navigant Research placed Ford and GM at the top of its autonomous driving leaderboard, surprisingly far above Waymo (7th), the pioneer of autonomous driving. Waymo was only listed as a contender, and Tesla who has already clocked over 300 million miles in Autopilot (Level 2 Autonomy) did not make the Top 10 list. Waymo, not aiming to develop a car, but rather focusing on autonomous technology has partnered with Chrysler and Ford on testing autonomous technology. Making Navigant’s findings even more surprising to us is that Waymo performed exceptionally well compared to other automakers on the list when comparing across all permit holders allowed to test autonomous tech on Californias public roads. According to CA DMV regulations, each permit holder must annually file a disengagement report, reflecting the number of events where a driver essentially has to take over from the vehicle’s autonomous mode to either prevent a traffic incident or where the system fails. Waymo posted a record 0.2 disengagements per 1,000 miles in its 2016. For a breakdown of each permit holders testing in California read our recent blog providing detailed analysis.

Navigant’s criteria are based on the following ten factors; vision, go-to-market strategy, partners, production strategy, technology, sales, marketing, and distribution, product capability, product quality and reliability, product portfolio and staying power. The Top Ten on Navigant’s list are Ford, GM, Renault–Nissan Alliance, Daimler, Volkswagen Group, BMW, Waymo, Volvo/Autoliv/Zenuity, Delphi and Hyundai Motor Group.
Despite Tesla aiming to have a market ready Level 5 autonomous product by the end of the year, it is only listed as a contender. Tesla is criticized by some, for being too aggressive, using its customers as guinea pigs for its AutoPilot software. Not surprising though is that Uber features on the bottom end of the list, the controversial ride-hailing company has been in the news lately for losing its right to test in San Francisco, being sued by Waymo and a crash in Tempe, Arizona, temporarily halting its pilot program.