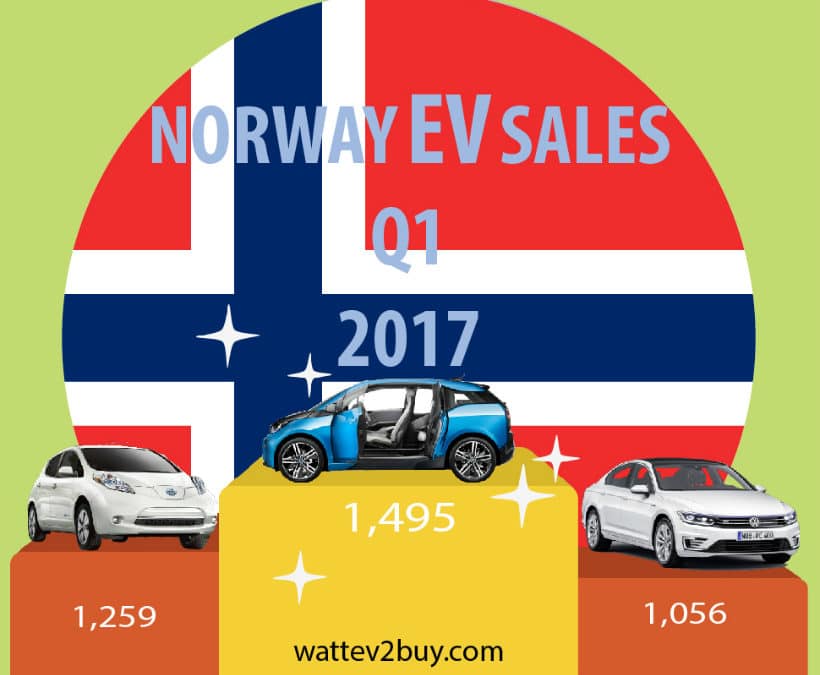 There were 2,250 more electric vehicles sold in Norway than during the same period in 2016, resulting in a 20.03% increase year-on-year. Norway is the darling of the EV sector and is targeting 100% EV ownership by 2025. The country is number three on the list of Top 10 EV markets, and number one the list of EV as a percentage of new vehicle registrations. The country is now officially a growth market, reaching the take-off point for the technology. EV sales in Norway as a percentage of the total fleet for the year 2016 was at a record 29.1%. The prospects for 2017 looks even better, as in January the percentage of EV’s registered achieved a record-breaking 37.5% and kept the momentum for the following two months.

Small family cars constituted four of the top 5 positions, and Battery Electric Vehicles (BEV) marginally outsold Plug-In Hybrid Vehicles (PHEVs). The BMW i3, who’s BEV variant made up the overwhelming majority of the models’ sales was the best seller for the quarter and nearly double that of the same period in 2016. The Nissan Leaf showed strong growth and was the best-selling car in March 2017. The Tesla Model X performed better than the Model S, with the Model X being the second best seller of all electric cars in March 2017. The best PHEVs were the VW Passat GTE, the Mitsubishi Outlander, and Mercedes GLC350e. Although still on the top 5 list the Mitsubishi Outlander is showing a significant decline in sales, selling only two-thirds of what it did last year. The Toyota Prius has not performed as well as in some other markets. Mirroring most other markets, the BMW x5 xDrive40e sales in Norway showed a decline, selling a third less when compared to March 2016.