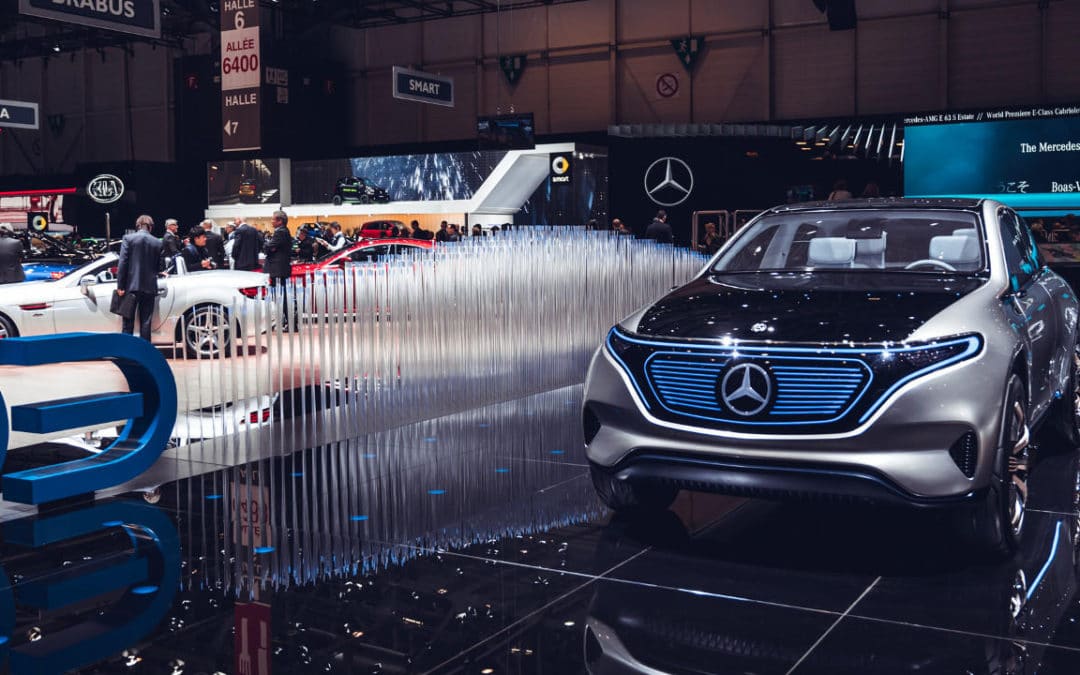 By unpacking press statements from the world’s top luxury carmakers, BMW and Daimler, over the last eight months it is clear that the Daimler EV strategy will trump that of BMW over the next decade. Up to now, BMW has led the race between the two companies in the EV sector, but the German automaker is failing to capitalize on its position. BMW was first to market with a pure electric vehicle, the BMW i3, which success even surprised itself. This week BMW released its sales data for the first quarter 2017, showing that EVs now constitute 3% of its total sales as EV sales jumped 50%. The Chairman of the Board, Mr. Harald Kruger was quoted saying “We are therefore well on course to delivering more than 100,000 electrified vehicles for the first time in 2017”. The news from the top seems very bullish on face-value but therein lies the problem. BMWs management has been flip-flopping on finding a consensus view on where they see electric vehicles in the future. This week’s news from BMW is in stark contrast from news only six months earlier when the Board grappled with if it should pursue EVs at all.

In September 2016 Reuters reported that the executive of BMW would not attend the 2016 Paris Auto Show as it grappled with its electric car strategy. At the time the company lost momentum against Mercedes and VW who is chasing Tesla. The lack of momentum caused the head of the BMW i8 project to jump ship to Future Mobility, taking most of the core team with him. The executive team remained split on the future of electric vehicles and investing in what is initially a loss making exercise. The top executive team traditionally attend the Paris Auto Show, which is one of the most prestigious events in the industry, highlighting the significance of the board’s action.

The pro-EV block prevailed but despite BMW reaffirming its strategy to pursue the development of electric vehicles the company remained downbeat on the sector. BMW’s Chief Financial Officer, Frederick Eichner, was quoted by Bloomberg saying “We’ve learned that people aren’t prepared to pay a higher price for an electric vehicle. I don’t see some kind of disruptive element coming from electric cars that would prompt sales to go up quickly in the next five to six years.” So its seems that BMW changed its wait-and-see approach to a go-it-slow approach and remained cautious when it came to investing aggressively in the new technology. Where at first the company was a leader in developing the new proprietary technology it now joined most of the other laggards in producing PHEV variants of existing models, with no clarity on when BEV models will be available and how many.

In early March 2017, Mr. Harald Krüger was quoted by Reuters as saying “The fully electric drivetrain will be integrated into our core brands. To achieve this, we are now gearing our architectures toward combustion engines and pure battery electric drivetrains,” as the company plans to include EV manufacturing in its mass production line. Currently, the company’s electric vehicles are assembled at its low-volume plant in Leipzig. BMW will also expand the capacity of its PHEV drivetrain plant in Thailand and fund the cost of the investment in its electric vehicle infrastructure through a production increase in its profitable SUV segment. To ramp up production to meet expected demand for the new Mini Countryman PHEV the company is considering manufacturing facilities for the Mini in Germany, the Netherlands, and the UK. The company also announced that it would start producing its iNext autonomous brand at its Dingolfing plant form 2021. Other models expected from the German automaker is the i8 Roadster PHEV (2018), a BEV Mini (2019), and a BEV X3 (2020). BMW‘s long-term electric vehicle strategy is to have EV’s contribute to between 15% and 25% of its sales by 2025.

Daimler, on the other hand, had the foresight at the start of the cycle to be an early investor in Tesla. The company invested $50 million in the Series E round in May 2009, and have been hailed by Elon Musk for saving the company from bankruptcy in the early years. Unfortunately, Daimler failed to follow the same daring approach it invested in in its own business model and fell behind BMW and Tesla.

Daimler’s passive stance changed in July 2016 when its CEO, Dieter Zetsche acknowledged the technology’s importance and expected an increase in EVs market share of the total vehicle market. The German automaker shifted its strategy to accelerate its efforts to stay abreast of its competitors, Tesla and BMW‘s push to ramp up production in the luxury electric vehicle segment. Within a short space of time, the company announced a massive $11Bln investment to support its electric vehicle strategy up to 2025, unveiled its new all-electric car brand, the EQ (Electric Intelligence) and unveiled a fully electric semi-truck. The EQ brand will develop a host of EV related services and products, not just cars, such as charging stations and battery packs. The first vehicle to come from the brand is targeted at the highly popular SUV segment, a clever move to differentiate the brand in this hotly contested sector. The EQ SUV is said to have a battery capacity of 70kWh providing a range of over 250miles powering two electric motors providing 300kW of power. The production version is expected to be launched in 2018.

In early April 2017 Daimler announced that it would accelerate its $11 billion investment in electric vehicles by bringing it forward with three years from 2025, to 2022. Reuters reported that the automaker’s aggressive stance are the result of it not being able to cut fleet emissions of 123gm CO2/km from 2015 to 2016 in Europe. Europe has set a very stringent target of 95gm CO2/km by 2020. Daimler’s own target for 2020 is 100gm CO2. The German automaker cites the popularity of SUV’s as the reason for it not cutting its emissions for the first time since 2007. Daimler’s success in the SUV segment helped it to regain its dominance over archrival BMW for the first time since 2005.

In May 2017 Automotive News interviewed Mercedes-Benz head of production and supply chain management, Markus Schaefer.  When asked how the company is preparing to assemble the EQ brand Mr. Schaefer responded – “We believe the EQ family will represent 15 to 25 percent of our sales in 2025, but at the end of the day, no one can say with certainty how high the share will be. Therefore, we need maximum flexibility, meaning we will integrate the EQ models into the same assembly line as the combustion engine models they will potentially replace. Preparations are on schedule, so our plants should be capable of operating at stable output levels whatever the EV take rates may be. But in order to facilitate this greater flexibility, we also had to adapt our manufacturing.” The capacity to mass produce EVs efficiently through the full-flex plant manufacturing strategy is set to help the company recover the massive investment it will make to get ahead in the EV sector.

Daimler is also investing heavily in charging infrastructure in Europe to facilitate the adoption of electric vehicles. The final proof of Daimler’s strategy will be the early release of a full electric SUV. 2018 is certainly going to be an exciting year for the electric vehicle market. 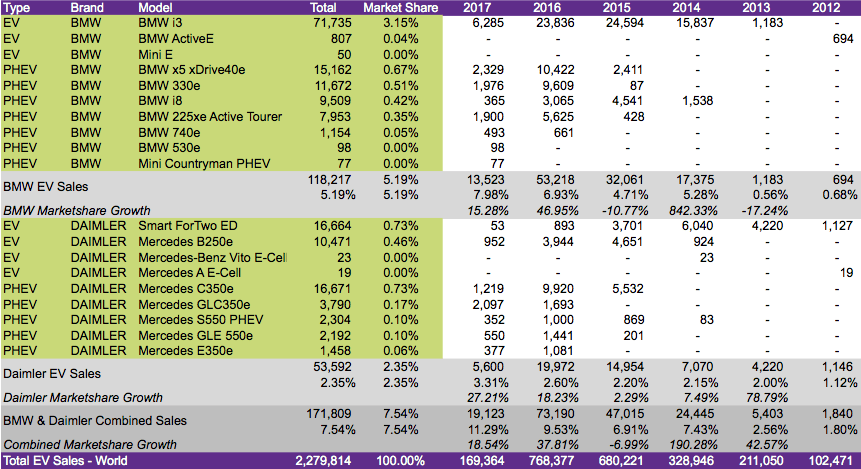 Note to data: The BMW i3 is listed as a BEV but includes sales for the BMW i3REx, a range-extended vehicle, a PHEV.

Interested in learning more about electric vehicles? Download our fun and easy app below, set your daily commute distance and price range, swipe left the models you don’t like, right the ones you do, enter the chat rooms and share your thoughts with the community.